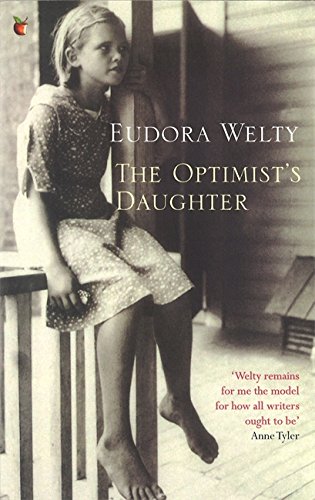 The Optimist's Daughter
by Eudora Welty

The Optimist's Daughter by Eudora Welty

The people of Mount Salus, Mississippi always felt good about Judge McKelva. He was a quiet, solid reassuring figure, just as a judge should be. Then, ten years after his first wife's death, he marries the frivolous young Wanda Fay. No-one can understand his action, not least his beloved daughter, Laurel, who finds it hard to accept the new bride. It is only some years later, when circumstance brings her back to her childhood home, that Laurel stirs old memories and comes to understand the peculiarities of her upbringing, and the true relationship between her parents and herself.

The Optimist's Daughter is a reflective, poignant novel of independence and love, for which Eudora Welty, one of America's gretest contemporary Southern writers, was awarded the Pulitzer Prize.

Her last, most autobiographical, and finest novel * Independent *
A gentle, tender work, bright with Welty's sharp humour and pioneer sense of place. * Guardian *

Eudora Welty was born in 1908 in Jackson, Mississippi which is where she still makes her home. One of America's most distinguished writers, she has published five novels and as many volumes of short stories. She was awarded the Pulitzer Prize in 1973.

GOR001275487
The Optimist's Daughter by Eudora Welty
Eudora Welty
Virago Modern Classics
Used - Very Good
Paperback
Little, Brown Book Group
1984-10-18
192
0860683753
9780860683759
Winner of Pulitzer Prize Novel Category 1973 Winner of Pulitzer Prize for Fiction 1973
Book picture is for illustrative purposes only, actual binding, cover or edition may vary.
This is a used book - there is no escaping the fact it has been read by someone else and it will show signs of wear and previous use. Overall we expect it to be in very good condition, but if you are not entirely satisfied please get in touch with us.