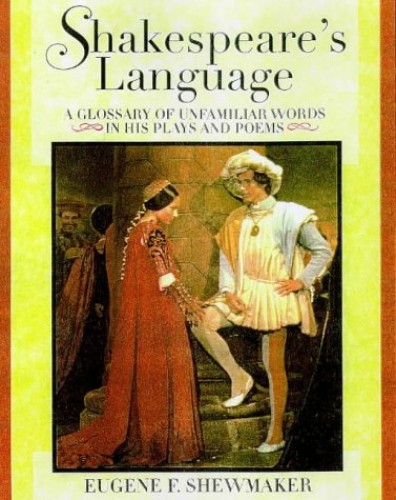 Used Price
$40.99
inc. GST
Free Shipping in Australia
"Shakespeare's Language" is a comprehensive glossary of the arcane references, unfamiliar expressions, and words of his own invention in Shakespeare's writings. It provides definitions of the words as they are used in the text.
Reviews:
Trustpilot
Very Good

Shakespeare's Language: A Glossary of Unfamiliar Words to His Plays and Poems by Eugene Shewmaker

It is said that England and America are two nations separated by a common language, and nowhere is that more true than in our dealings with the Bard. Rife with arcane references, unfamiliar expressions, and even made-up words, Shakespeare's texts can intimidate even the most learned reader. Here in one comprehensive volume, Shakespeare's ornate and sometimes bewildering language is made easy to understand.

Among the 15,000 entries are:
-- Definitions of words as they are used in the texts -- it is not necessary to know the infinitive or root of a word to find its meaning
-- A quote placing each defined word or phrase in context so users can be sure of its correct usage
-- Geographical references, historical and mythological figures, and foreign-language expressions.

Shakespeare's Language is an invaluable desktop resource for students, researchers, and anyone interested in making sense of one of the world's greatest playwrights. Newcomers will be grateful for its clarity; experts will be impressed by its scope and scholarship.

GOR002350598
Shakespeare's Language: A Glossary of Unfamiliar Words to His Plays and Poems by Eugene Shewmaker
Eugene Shewmaker
Used - Very Good
Hardback
Facts On File Inc
1996-03-01
526
0816032769
9780816032761
N/A
Book picture is for illustrative purposes only, actual binding, cover or edition may vary.
This is a used book - there is no escaping the fact it has been read by someone else and it will show signs of wear and previous use. Overall we expect it to be in very good condition, but if you are not entirely satisfied please get in touch with us.