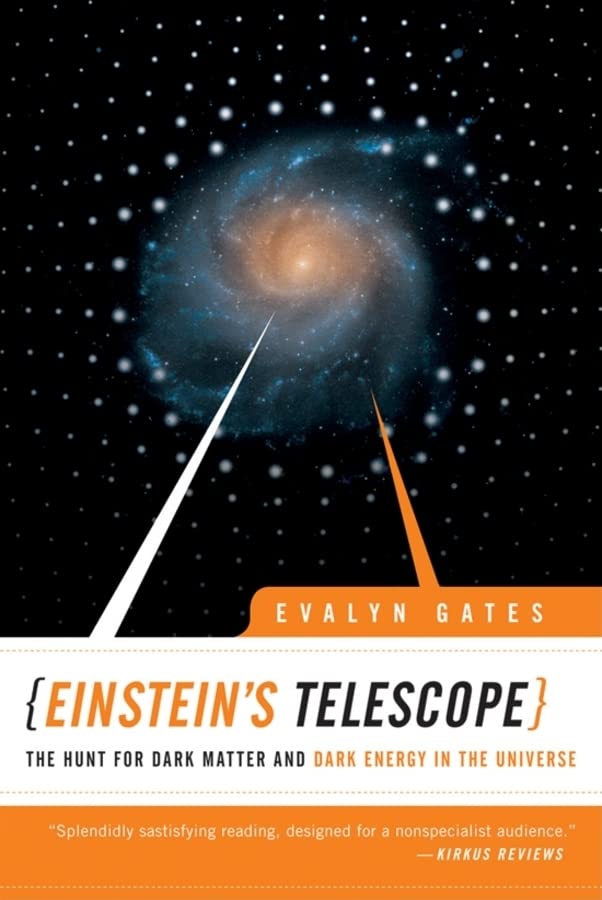 Einstein's Telescope: The Hunt for Dark Matter and Dark Energy in the Universe by Evalyn Gates

Evalyn Gates, a talented astrophysicist, transports readers to the edge of contemporary science to explore the revolutionary tool-"Einstein's telescope"-that is unlocking the secrets of the Universe. Einstein's telescope, or gravitational lensing, is so-called for the way gravity causes space to distort and allow massive objects to act like "lenses," amplifying and distorting the images of objects behind them. By allowing for the detection of mass where no light is found, scientists can map out the distribution of dark matter and come a step closer to teasing out the effects of dark energy on the Universe-which may forever upend long-held notions about where the Universe came from and where it is going.

"Starred Review. As exciting as it is informative." -- Booklist
"Gates . . . brings dark matter, dark energy, and even black holes to light . . . with deft humor and grace." -- Neil deGrasse Tyson, author of Death by Black Hole and The Pluto Files
"Engaging, fearless, factual, and kind." -- Robert P. Kirshner, author of The Extravagant Universe

Evalyn Gates is the assistant director of the Kavli Institute for Cosmological Physics, a senior research associate at the University of Chicago, and the former astronomy director of the Adler Planetarium. Her writing has appeared in Physics Today and the Chicago Tribune.

GOR008038525
Einstein's Telescope: The Hunt for Dark Matter and Dark Energy in the Universe by Evalyn Gates
Evalyn Gates
Used - Very Good
Paperback
WW Norton & Co
2010-02-22
320
0393338010
9780393338010
N/A
Book picture is for illustrative purposes only, actual binding, cover or edition may vary.
This is a used book - there is no escaping the fact it has been read by someone else and it will show signs of wear and previous use. Overall we expect it to be in very good condition, but if you are not entirely satisfied please get in touch with us.