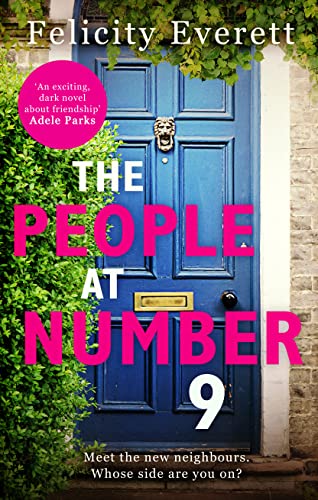 The People at Number 9
by Felicity Everett

`Everett cleverly maintains the suspense until the final denouement ... a compelling and easily readable tale of our times' - Daily Mail

Meet the new neighbours. Whose side are you on?

The People at Number 9 Summary

The People at Number 9 by Felicity Everett

`Everett cleverly maintains the suspense until the final denouement ... a compelling and easily readable tale of our times' - Daily Mail

Meet the new neighbours. Whose side are you on?

Have you met the People at Number 9?

Sara and Neil have new neighbours in their street. Glamorous and chaotic, Gav and Lou make Sara's life seem dull. As the two couples become friends, sharing suppers, red wine and childcare, it seems a perfect couples-match. But the more Sara sees of Gav and Lou, the more she longs to change her own life. But those changes will come at a price.

The People at Number 9 Reviews

`Cleverly maintains suspense...a compelling and readable tale of our times' - The Daily Mail

`This was clever, relentless and utterly recognisable. I absolutely loved it!' - Katie Fforde

`Very occasionally, a novel that's not in the crime genre grips me as much as the best thrillers do. The People at Number 9 held me in its vice-like grip from first page to last. It's a fascinating analysis of an unhealthy friendship based on insecurity and delusion, and the characters are so vividly drawn that I sympathised with them and despaired of them in equal measure.' - Sophie Hannah

`Excruciating yet unputdownable, this is domestic noir at its most gripping.' - Woman & Home

'A cautionary tale of what happens when you get caught up with the in-crowd... The characters and the games they play are instantly recognisable to anyone who has stood at the school gates and felt slightly out of place. I gulped it down quicker than a dirty Martini.' - Veronica Henry

`Incisively witty, painfully true... draws the reader in with the voyeuristic joy of gossiping about our friends and neighbours, with a shocking sting in the tail to catch us all out.' - Samantha King

`I LOVED it. Such an unsettling read, with a whole grass-is-greener vibe that makes it really quite creepy. The People at Number 9 has a really voyeuristic feel - like spying on your neighbours through a window. Perfect reading for a cold, dark night!' - Lisa Hall

Felicity Everett grew up in Manchester, lived, worked and raised her family of four in London and returned from a four year spell in Melbourne, Australia to live in Gloucestershire in 2014. After an early career in children's publishing and freelance writing, she published her debut adult novel The Story of Us in 2011. Her second novel, The People at Number 9 was published in 2017.

GOR008450433
The People at Number 9 by Felicity Everett
Felicity Everett
Used - Like New
Paperback
HarperCollins Publishers
2017-08-24
315
0008216886
9780008216887
N/A
Book picture is for illustrative purposes only, actual binding, cover or edition may vary.
The book has been read, but looks new. The book cover has no visible wear, and the dust jacket is included if applicable. No missing or damaged pages, no tears, possible very minimal creasing, no underlining or highlighting of text, and no writing in the margins.