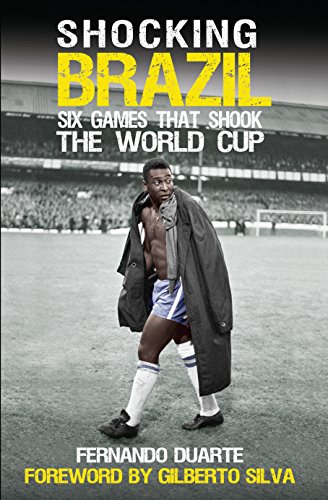 Foreword by Gilberto Silva. The Brazilian game has become synonymous with excellence, success and beautiful, irresistible football. Supporters from every part of the globe are able to recount joyful tales about Brazil's unmatched achievements, especially ones of World Cup glory - not for them the almost fifty years of hurt endured by England fans. But few realise that the most crucial transformations undergone by Brazilian football came as a direct result of the Selecao's failures. Shocking Brazil looks at six crucial World Cup campaigns that radically altered the face of Brazilian football and which had repercussions far beyond the sport. Behind the ignominy lurk narratives of racism, corruption, authoritarianism, corporate power and greed. This tour de force through the history of Brazilian football, told through the prism of these six famous defeats, is by turns fascinating, enlightening, shocking and utterly compelling.

'Duarte offers something unique: a rollicking account of the country's World Cup history in English by an insider ... he tells good stories, and the great players he interviews actually say interesting things'

'Fernando Duarte is a storyteller of rare ability, effortlessly mixing insight and entertainment, all with a sense of wonder'

'2014 was World Cup year and of the many writers who tried to capture what football means to Brazil, Duarte got the closest'

FERNANDO DUARTE is a former UK Correspondent for O Globo, a Brazilian daily newspaper based in Rio, who now writes extensively for the Guardian, ESPN, World Soccer, Football 24/7, and offers regular punditry for CNN, BT Sport, Talksport, National Geographic, the Today programme at Radio 4 and the Guardian Football Weekly podcast. He has covered the Brazilian national team since 2003, following them all around the world, and has reported from the 2006, 2010 and 2014 World Cups as well as the Sydney and London Olympics.

GOR006115819
Shocking Brazil: Six Games That Shook the World Cup by Fernando Duarte
Fernando Duarte
Used - Very Good
Paperback
Birlinn General
2014-06-01
240
1909715166
9781909715165
N/A
Book picture is for illustrative purposes only, actual binding, cover or edition may vary.
This is a used book - there is no escaping the fact it has been read by someone else and it will show signs of wear and previous use. Overall we expect it to be in very good condition, but if you are not entirely satisfied please get in touch with us.