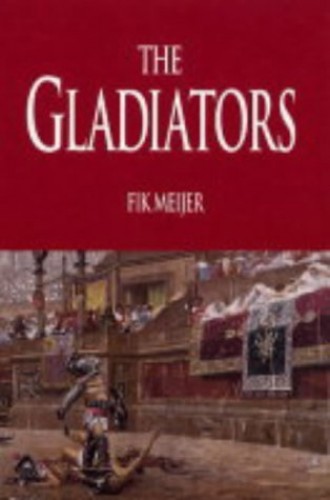 Out of Stock
$18.49
inc. GST
For almost eight hundred years men and women from all levels of Roman society were entertained by battles for life and death in the arena.
Very Good
Only 0 left

Superfit, muscled, macho, the gladiator was hero-worshipped for his skill and courage as he fought to the death, yet despised for his humble status. For over six cruel centuries, tens of thousands died in the bloodsoaked arenas of Rome and its colonies, watched by enthralled crowds, screaming for violence. Drawn from prisoners of war, slaves, convicts and in later centuries, Roman citizens fighting for money and excitement, the gladiators lived inside gladiator schools where they trained in special fighting techniques: the retiarius with net and trident, the thraex with short sword and round shield, the secutor, the murmillo, the hoplomachus. Few lived to old age or found freedom again. Fewer still lived to tell their tale. Professor Fik Meijer has ingeniously pieced together their true stories from grave epitaphs, graffiti, mosaics, frescoes and engravings, from artifacts found under the ashes of Pompeii, and quotations from ancient Roman writers, as well as his close study of Greek and Etruscan history. He describes the gladiators' origins, daily life, training, the odds of their survival pitted against the emperors' lust for blood and spectacle. He illustrates the vast, complex organisation and expense incurred in staging the shows. As more and more grandiose performances were staged, the Colosseum was built and copied all over the Roman Empire, and the extravagant spectacles became day-long. The morning show began with the 'hunting' of wild animals, sometimes in their thousands, followed by wild animal fights: bear against bull or captured slaves, Christians against crocodiles, lions, tigers, hippopotamuses even, all shipped from Rome's African colonies. At lunchtime came the public executions, and in the afternoon the long-awaited, much applauded gladiator fights, the day's main attraction. Professor Meijer brings these events vividly to life and ends his fasconating book by comparing the real evidence he has uncovered with portrayals in films such as Spartacus and Gladiator.

"Forget Russell Crowe in a skirt and sandals, this is the real deal if you want to know about blood and guts in the arena. The author has pieced together thousands of documents, eyewitness testimonies, and engravings to tell in vivid detail the story of the gladiators of ancient Rome."
-- "The Daily Mail" [UK]
"Fik Meijer, a professor of ancient history in Amsterdam, gives fascinating insight into Ancient Rome's gladiators. ... An in-depth book...." -- "The Big Issue"
[Meijer] has written a history that is at once interesting, informative, and fast-paced. Thumbs up or thumbs down? No contest." -- "Leeds Guide
"

Fik Meijer is a Dutch historian and author.

GOR001707139
Gladiators: History's Most Deadly Sport by Fik Meijer
Fik Meijer
Used - Very Good
Paperback
Souvenir Press Ltd
2004-10-07
256
0285637045
9780285637047
N/A
Book picture is for illustrative purposes only, actual binding, cover or edition may vary.
This is a used book - there is no escaping the fact it has been read by someone else and it will show signs of wear and previous use. Overall we expect it to be in very good condition, but if you are not entirely satisfied please get in touch with us.