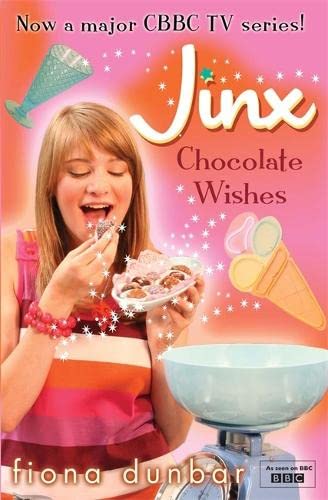 New CBBC comedy series JINX is about to hit our screens on Saturday 31st October on BBC1 at 10.30am! Check out this brand new 13 part magical sitcom about a teenager called Lula and a magic cookbook she owns.

Based on Fiona Dunbar's bestselling LULU BAKER trilogy, the comedy-drama series charts the adventures of a truly modern-day Cinderella.

To coincide with this brand new series, Orchard Books are releasing three tie-in editions so you can read all about Lulu Baker's magical adventures first!

Lulu Baker and her magical cookbook are back, in the final book of the Lulu Baker trilogy! But so, unfortunately, is the dreaded Varaminta le Bone. And this time she's managed to get her hands on Lulu's precious recipe book. Lulu must once again use all her wiles to scupper the evil plans of Varaminta and her son, the dastardly Torquil. But will she get a happy ending of her own?

Fiona Dunbar was born in Hertfordshire. She grew up trailing around jazz clubs with her jazz musician stepfather and left school when she was sixteen to go to Art College. After living in New York for a number of years, where her two children were born, Fiona settled back in North London and began to write for children. When she`s not writing, painting or gardening, Fiona loves nothing better than to cook. Her creations might not be as magical as Lulu`s but they bring just as much pleasure in the end!

GOR003047504
The Lulu Baker Trilogy: Chocolate Wishes: Book 3 by Fiona Dunbar
Fiona Dunbar
The Lulu Baker Trilogy
Used - Very Good
Paperback
Hachette Children's Group
2009-09-17
256
1408307464
9781408307465
N/A
Book picture is for illustrative purposes only, actual binding, cover or edition may vary.
This is a used book - there is no escaping the fact it has been read by someone else and it will show signs of wear and previous use. Overall we expect it to be in very good condition, but if you are not entirely satisfied please get in touch with us.