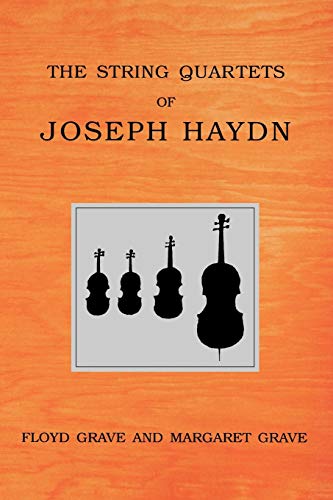 A monumental accomplishment from the age of Enlightenment, the string quartets of Joseph Haydn hold a central place not only in the composer's oeuvre, but also in our modern conception of form, style, and expression in the instrumental music of his day. Here, renowned music historians Floyd and Margaret Grave present a fresh perspective on a comprehensive survey of the works. This thorough and unique analysis offers new insights into the creation of the quartets, the wealth of musical customs and conventions on which they draw, the scope of their innovations, and their significance as reflections of Haydn's artistic personality. Each set of quartets is characterized in terms of its particular mix of structural conventions and novelties, stylistic allusions, and its special points of connection with other opus groups in the series. Throughout the book, the authors draw attention to the boundless supply of compositional strategies by which Haydn appears to be continually rethinking, reevaluating, and refining the quartet's potentials. They also lucidly describe Haydn's famous penchant for wit, humor, and compositional artifice, illuminating the unexpected connections he draws between seemingly unrelated ideas, his irony, and his lightning bolts of surprise and thwarted expectation. Approaching the quartets from a variety of vantage points, the authors correct many prevailing assumptions about convention, innovation, and developing compositional technique in the music of Haydn and his contemporaries. Going beyond traditional modes of study, The String Quartets of Joseph Haydn blends historical analysis and factual information with critical appraisal in a way that will engage all Haydn enthusiasts.

The book is intelligently organized, mindful of unfair value judgments against earlier works and simply packed full of information. * Karen Hiles, Cambridge journal Eighteenth-Century Music *
Both of them eminent scholars, Floyd and Margaret Grave bring to this undertaking not only a comprehensive knowledge of the existing literature but also an admirable ability to present their material coherently and to supplement it with their own analytical insights * Early Music *

Floyd and Margaret Grave have worked both independently and together on a variety of research projects, centering mostly on problems of eighteenth-century music sources, theory, criticism, and analysis. Floyd Grave currently teaches in the Music Department at Rutgers University, where he has served as director of the graduate programs in musicology, music theory, and composition. He has also taught at New York University and the University of Virginia. Both Floyd and Margaret have received numerous research grants and contributed articles to the New Grove Dictionary of Music and Musicians , first and second editions.

GOR008935893
The String Quartets of Joseph Haydn by Floyd Grave (Music Department at Rutgers University)
Floyd Grave (Music Department at Rutgers University)
Used - Very Good
Paperback
Oxford University Press Inc
2009-02-26
396
0195382951
9780195382952
N/A
Book picture is for illustrative purposes only, actual binding, cover or edition may vary.
This is a used book - there is no escaping the fact it has been read by someone else and it will show signs of wear and previous use. Overall we expect it to be in very good condition, but if you are not entirely satisfied please get in touch with us.