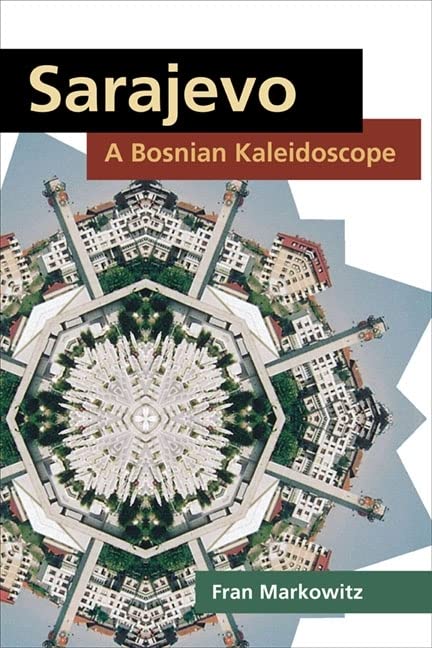 In Stock
$18.49
+10% GST
An anthropological analysis of Sarajevo and its cultural complexities that examines contemporary issues of social divisiveness, pluralism, and intergroup dynamics in the context of national identity and state formation.
Very Good
Only 1 left

&&LI&&&&LI&&&&LI&&/* Style Definitions */table.MsoNormalTable{mso-style-name:"Table Normal";mso-tstyle-rowband-size:0;mso-tstyle-colband-size:0;mso-style-noshow:yes;mso-style-priority:99;mso-style-qformat:yes;mso-style-parent:"";mso-padding-alt:0in 5.4pt 0in 5.4pt;mso-para-margin-top:0in;mso-para-margin-right:0in;mso-para-margin-bottom:10.0pt;mso-para-margin-left:0in;line-height:115%;mso-pagination:widow-orphan;font-size:11.0pt;font-family:"Calibri","sans-serif";mso-ascii-font-family:Calibri;mso-ascii-theme-font:minor-latin;mso-fareast-font-family:"Times New Roman";mso-fareast-theme-font:minor-fareast;mso-hansi-font-family:Calibri;mso-hansi-theme-font:minor-latin;}This fascinating urban anthropological analysis of Sarajevo and its cultural complexities examines contemporary issues of social divisiveness, pluralism, and intergroup dynamics in the context of national identity and state formation. Rather than seeing Bosnia-Herzegovina as a volatile postsocialist society, the book presents its capital city as a vibrant yet wounded center of multicultural diversity, where citizens live in mutual recognition of difference while asserting a lifestyle that transcends boundaries of ethnicity and religion. It further illuminates how Sarajevans negotiate group identity in the tumultuous context of history, authoritarian rule, and interactions with the built environment and one another. As she navigates the city, Fran Markowitz shares narratives of local citizenry played out against the larger dramas of nation and state building. She shows how Sarajevans' national identities have been forged in the crucible of power, culture, language, and politics. Sarajevo: A Bosnian Kaleidoscope acknowledges this Central European city's dramatic survival from the ravages of civil war as it advances into the present-day global arena.

"Markowitz dispels widely held myths that Sarajevo has become a purely Muslim city. . . . The author's many insights into Sarajevo and its kaleidoscope of inhabitants are welcome and valuable."Slavic Review"Recommended."--Choice
"A warm and well-written portrait of Sarajevo during its first post-war decade."--Journal of the Royal Anthropological institute "A stunningly fresh and invigorating analysis. Markowitz's inspired approach offers multiple possibilities for envisioning the city and for recasting Bosnian identity."--Michael Herzfeld, author of Evicted from Eternity: The Restructuring of Modern Rome
"Markowitz has succeeded in combining a solid work of scholarship with a personal take on her subject which she explores in a very thorough and balanced way. This is a rich contribution to the scholarship on the issue of identify in present-day Bosnia & Hercegovina and deserves a wide audience, appealing to both the academic and general reader."--Europe-Asia Studies

Fran Markowitz is a professor of cultural anthropology at Ben-Gurion University of the Negev in Israel and the author of Coming of Age in Post-Soviet Russia and A Community in Spite of Itself: Soviet Jewish Emigres in New York.

List of Illustrations; Acknowledgments; Pronunciation Guide Introductions 1.Meeting and Greeting the City; 2. Practices of Place: Living in and Enlivening Sarajevo Bosniacs, Croats, and Serbs: The Constituent Nations of Bosnia-Herzegovina 3. National Legibility: Lines of History, Surges of Ethnicity; 4. Census and Sensibility: Confirming the Constitution Ostali: The Other People(s) of Bosnia-Herzegovina 5. Where Have All the Yugoslavs, Slovenes, and Gypsies Gone?; 6. Sarajevo's Jews: One Community among the Others; 7. Insisting on Bosnia-Herzegovina: Bosnian Hybridity Conclusion 8. After Yugoslavia, after War, after All: Sarajevo's Cultural Legacies Glossary; Notes; References; Index

GOR009697228
Sarajevo: A Bosnian Kaleidoscope by Fran Markowitz
Fran Markowitz
Interp Culture New Millennium
Used - Very Good
Paperback
University of Illinois Press
2010-04-01
240
025207713X
9780252077135
N/A
Book picture is for illustrative purposes only, actual binding, cover or edition may vary.
This is a used book - there is no escaping the fact it has been read by someone else and it will show signs of wear and previous use. Overall we expect it to be in very good condition, but if you are not entirely satisfied please get in touch with us.