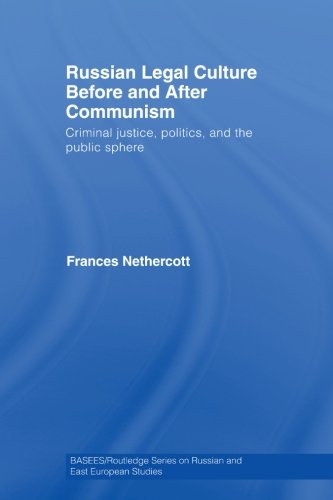 Russian Legal Culture Before and After Communism
by Frances Nethercott (University of St Andrews, UK)

Russian Legal Culture Before and After Communism Summary

Russian Legal Culture Before and After Communism: Criminal Justice, Politics and the Public Sphere by Frances Nethercott (University of St Andrews, UK)

Following the emancipation of the serfs in 1861, and again during the Gorbachev and Yel'tsin eras, the issue of individual legal rights and freedoms occupied a central place in the reformist drive to modernize criminal justice. While in tsarist Russia the gains of legal scholars and activists in this regard were few, their example as liberal humanists remains important today in renewed efforts to promote juridical awareness and respect for law. A case in point is the role played by Vladimir Solov'ev. One of Russia's most celebrated moral philosophers, his defence of the `right to a dignified existence' and his brilliant critique of the death penalty not only contributed to the development of a legal consciousness during his lifetime, but also inspired appeals for a more humane system of justice in post-Soviet debate. This book addresses the issues involved and their origins in late Imperial legal thought. More specifically, it examines competing theories of crime and the criminal, together with various prescriptions for punishment respecting personal inviolability. Charting endeavours of the juridical community to promote legal culture through reforms and education, the book also throws light on aspects of Russian politics, society and mentality in two turbulent periods of Russian history.

Russian Legal Culture Before and After Communism Reviews

"Nethercott's book demonstrates how contemporary legal thinkers and reformers have found theoretical and practical inspiration from their imperial predecessors, while always acknowledging the inherent difficulties...In the end, this is a well-researched and thoughtful analysis of law in two vibrant eras of Russian history. This is a welcome addition to the literature on Russian law and legality useful for the student and scholar alike." - William B. Whisenhunt, The Russian Review (October 2008, Vol. 67, No. 4)

'Nethercott's book is successful on several fronts. It may be of equal interest to historians, philosophers of law and jurists. It provides a rich discussion of the reception and adaptation of theories of crime and punishment by several generations of Russian legal thinkers. And it tracks the changing relationship between law and morality in Russian legal thought and practice.' - Stefan Kirmse, Humboldt-Universitat zu Berlin, H-Soz-u-Kult, June 2009

Frances Nethercott is a Lecturer in Russian history at St Andrews University, UK. She specializes in intellectual and cultural history. Her previous publications include Une Rencontre Philosophique: Bergson en Russie, 1907-1917, and Russia's Plato: Plato and the Platonic Tradition in Russian Education, Science and Ideology, 1840-1930.

GOR010197367
Russian Legal Culture Before and After Communism: Criminal Justice, Politics and the Public Sphere by Frances Nethercott (University of St Andrews, UK)
Frances Nethercott (University of St Andrews, UK)
BASEES/Routledge Series on Russian and East European Studies
Used - Very Good
Paperback
Taylor & Francis Ltd
2012-06-14
224
0415543142
9780415543149
N/A
Book picture is for illustrative purposes only, actual binding, cover or edition may vary.
This is a used book - there is no escaping the fact it has been read by someone else and it will show signs of wear and previous use. Overall we expect it to be in very good condition, but if you are not entirely satisfied please get in touch with us.