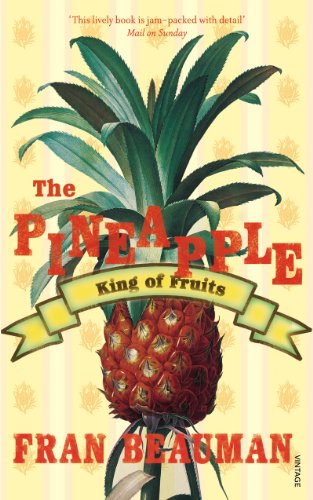 The Pineapple
by Francesca Beauman

In Stock
$30.99
inc. GST
As the story rolls on, through the heyday of pineapple chunks and cocktails, right up to the fashions of today,it touches on pineapples and sex, pineapples and empire, pineapples in art. Why is the pineapple so special?
Like New Very Good
Only 1 left

The Pineapple: King of Fruits by Francesca Beauman

This enchanting, juicy history takes us from the pineapple's origins in the Amazon rainforests to its first tasting by Columbus in Guadeloupe and its starring role on the royal dinner tables of Europe. In the eighteenth-century this spectacular fruit reigned supreme: despite the fact that, at first, to cultivate just one cost the same as a new coach, every great house soon boasted its own steaming pits filled with hundreds upon hundreds of pineapple plants. As the Prada handbag of its day, a real-life, homegrown pineapple was a powerful status symbol, so much so that at first, it was extremely unusual actually to eat the fruit. The image appeared on gateposts, on teapots, furniture and wallpaper.

A new phase opened when growers in the Caribbean began supplying pineapples in the 1840s and later the first canning factory was built in Hawaii. As the story rolls on, through the heyday of pineapple chunks and cocktails, right up to the fashions of today,it touches on pineapples and sex, pineapples and empire, pineapples in art.

Why is the pineapple so special? In one surprising sense it is indeed ideal. Made up of hundreds of separate fruitlets, its spirals embody the gradations of the Golden Mean - it is mathematically perfect. But it is more than that - for years a focus of traveller's tales, it is a treasure of sight and scent and taste. Packed with fascinating illustrations, this delicious book sees Fran Beauman explore the life and lore of the king of fruits: scholarly, witty and fun, it is a true hamper of delights.

It is surprising how few books there are on the history of fruits. Few topics can be more satisfyingly whole or surprisingly rich - more fruitful, in short. The pineapple's 500-year recorded history leads first-time author Fran Beauman to explore linguistics, social and economic history, colonialism, the industrial revolution, stone masonry, gardening technology and much more...Beauman jauntily rides the pineapple on through history. -- Zoe Strimpel * Financial Times *
Beauman's lively book is jam-packed with details..As Beauman concludes, the pineapple's tantalising exoticism its unique shape, heady perfume, lip-stinging juices and cultural resonance ensures it remains emphatically the king of fruits * Mail on Sunday *
Beauman's enthusiasm for her subject gives the book an admirable dynamism * Sunday Telegraph *

Fran Beauman graduated with a first class degree in History from Cambridge and now writes and presents for television. Her passion for pineapples began with a childhood visit to the pineapple-shaped garden retreat at Dunmore Park in Scotland and has taken her across the world. This is her first book.

GOR008386248
The Pineapple: King of Fruits by Francesca Beauman
Francesca Beauman
Used - Like New
Paperback
Vintage Publishing
2006-11-02
336
0099469448
9780099469445
N/A
Book picture is for illustrative purposes only, actual binding, cover or edition may vary.
This is a used book - there is no escaping the fact it has been read by someone else and it will show signs of wear and previous use. Overall we expect it to be in very good condition, but if you are not entirely satisfied please get in touch with us.