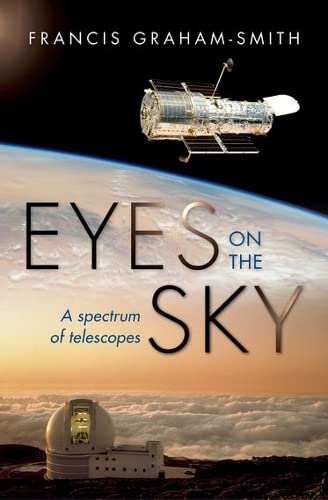 In Stock
$27.99
inc. GST
Astronomy is experiencing a golden age, with a new generation of innovative telescopes yielding a flood of information on the Universe. This book traces the development of telescopes from Galileo to the present day, and explains the basic principles of telescopes that operate in different parts of electromagnetic spectrum.
Very Good
Only 1 left

Eyes on the Sky Summary

Eyes on the Sky: A Spectrum of Telescopes by Francis Graham-Smith (Emeritus Professor, Jodrell Bank Centre for Astrophysics, University of Manchester)

Four centuries ago, Galileo first turned a telescope to look up at the night sky. His discoveries opened the cosmos, revealing the geometry and dynamics of the solar system. Today's telescopic equipment, stretching over the whole spectrum from visible light to radio and millimetre astronomy, through infrared to ultraviolet, X-rays and gamma rays, has again transformed our understanding of the whole Universe. In this book Francis Graham-Smith explains how this technology can be engaged to give us a more in-depth picture of the nature of the universe. Looking at both ground-based telescopes and telescopes on spacecraft, he analyses their major discoveries, from planets and pulsars to cosmology. Large research teams and massive data handling are necessary, but the excitement of discovery is increasingly shared by a growing public, who can even join in some of the analysis by remote computer techniques. Observational astronomy has become international. All major projects are now partnerships; most notably the Square Kilometre Array, which will involve astronomers from over 100 countries and will physically exist in several of them. Covering the history and development of telescopes from Galileo to the present day, Eyes on the Sky traces what happens when humankind looks up.

Eyes on the Sky Reviews

The book offers a very nice historic survey of telescopes and the related techniques for astronomical observations in all parts of the spectrum, and should be a good read for anyone interested in the subject. * Manuel Vogel, Contemporary Physics *
[T]he real fascination of the book is the way it almost incidentally highlights how dramatically science has changed in little more than 50 years. * The Wall Street Journal *
there are two aspects that are fascinating here - one is the sheer range of equipment out there ... The other bit that's even more interesting is finding out more about how these telescopes actually work * Brian Clegg, Popular Science *
If you like to build your background knowledge and have an interest in how astronomy is undertaken, rather than just the results, this is the book for you. You probably won't consider this much of a holiday read, but if, like me, you have an interest in astronomy (and probably dabbled with small telescopes in your teens) it will be irresistible. * Brian Clegg, Popular Science *
an enjoyable and informative read * Andrew May, Fortean Times *
Graham-Smith sets out things clearly and comprehensively * Steve Craggs, Northern Echo *
a valuable history * Bernie Fanaroff, Nature *
Nobody could have done a better job than Graham Smith in presenting such a balanced and clear survey of telescopes in all wavebands, and setting them in a historical context. His book will be appreciated by all astronomers. * Martin Rees *

Sir Francis Graham Smith is a distinguished pioneer of radio astronomy. He was President of the Royal Astronomical Society from 1975 to 1977, and was appointed Director of the Royal Greenwich Observatory in 1976, where he was involved in setting up the Northern Hemisphere Observatory on the island of La Palma in the Canary Island. He was the thirteenth Astronomer Royal, serving from 1982 to 1990, and Physical Secretary and Vice-President of the Royal Society from 1988 to 1994. Awards for his work include the Royal Medal of the Royal Society (1987) and a knighthood in 1986. He also written several books, most recent of which is Unseen Cosmos, on the story of radio astronomy, published by OUP in 2014.