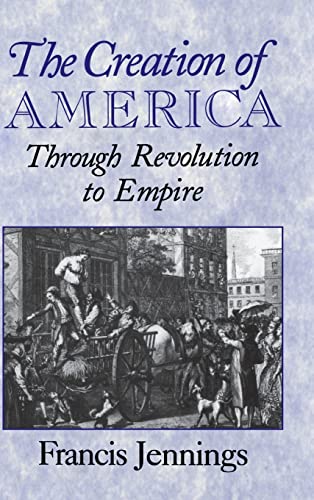 The Creation of America by Francis Jennings

This alternative history of the American Revolution, first published in 2000, portrays the colonists as conquerors. The revolution was an attempt to create not a democracy but an empire independent of Britain. To support his claims, the author includes information on the involuntary participation of Indians and blacks in addition to the usual players.

The Creation of America: Through Revolution to Empire by Francis Jennings

In the standard presentation of the American Revolution, a ragtag assortment of revolutionaries, inspired by ideals of liberty and justice, throw off the yoke of the British empire and bring democracy to the New World. In place of this fairy tale, Francis Jennings presents a realistic alternative: a privileged elite, dreaming of empire, clone their own empire from the British. This book, first published in 2000, shows that the colonists intended from the first to conquer American Indians. Though subordinate to the British crown, the colonists ruled over beaten native peoples. Some colonists bought Africans as slaves and rigidly ruled over them, and the colonists invented racial gradation to justify conquests and oppression. Jennings reveals as war propaganda the revolutionary rhetoric about liberty and virtue. Including the whole population in this meticulously documented history, Jennings provides an eloquent explanation for a host of anomalies, ambiguities, and iniquities that have followed in the American Revolution's wake.
"This time Jennings takes on the entire British imperial establishment both at the Court of St. James and in the Crown's mini-empires in North America. In familiar style he skewers many of the notables of American popular history on his sword of justice, exposing a network of self-interest, hypocrisy, and skulduggery under the surface of revolutionary rhetoric." Anthony F. C. Wallace, University of Pennsylvania
"This is vintage Jennings. It rests on enormous learning, a large historical vision, a strong moral sense, and absolute fearlessness about saying what the author thinks is right. Agree or disagree, it compels attention." Edward Countryman, Southern Methodist University
"Jenning's account...succeeds through a fair and honest reevaluation that not only sheds light on commonly neglected areas, but also provokes thought about uncomfortable aspects of our heritage. An outstanding supplement to the many conventional histories of the American Revolution, Jenning's history offers both an objective account of the conflict and challenging insights about historical distortion." Kirkus Reviews, New York
"Jennings presents his provocative views in a readable style that expands the substance of his argument." Mark Knoblauch, 8/00 Booklist
"If you look at life with a cunical point of view...you should really like Francis Jennings' book. Jennings does such a good job of presenting the evidence that he undermines his own position. One can legitimately look at the glass as being half-full." ACE Weekly
"Throughout, Jennings looks especially at the ways in which ideas about race helped the colonists justify certain kinds of conquest. And although he does not say much that has not been argued dozens of times before, his synthesis is provocative, useful and clearly stated." Publishers Weekly
"In this sweeping revisionist account of the American Revolution, Francis Jennings dispenses with the shibboleths that have long formed the mythology surrounding the nation's birth...Jenning's self-conscious attempt to forego traditional interpretations, and their sources, moves beyond iconoclasm for its own sake, and instead provides a take on the origins of the American empire that gives balance to "mainstream" perspectives." Virgina Quarterly Review vol 77, No.3
"a remarkable set of very engaging stories...Founding Brothers is a wonderful book, one of the best collections of essays on the Founders ever written." N.Y. Review of Books March 01
Part I. England Extends Conquests to North America: 1. Preface; 2. Origins; 3. Embryonic empires; 4. Dependencies: Indians, The West; 5. Colonial variety I: Virginia; 6. Colonial variety II: New England; 7. Colonial variety III: New York; 8. Colonial variety IV: Pennsylvania; 9. Colonial variety V: South Carolina; Part II. Frictions Arise Within The Empire: 10. 'Salutary neglect'; 11. Royal prerogative in America; 12. War in principle; 13. Irritants; 14. At the core; 15. George III; 16. Reactions becoming revolution; 17. A variation on the theme of liberty; 18. Repression and resistance; 19. A battle for bishops; Part III. An American Clone Breaks Off: 20. Imperial and colonial frontiers; 21. Changing sides; 22. Defiance and crackdown; 23. Uniting for liberty, tentatively; 24. Shots heard round the world; 25. Multiple revolutions; 26. Decision; 27. Religion then and now; 28. A 'people's democracy'; 29. Liberty, virtue, empire; 30. Conquest, slavery, race; 31. Combat: multiple outbreaks; 32. Combat: the western theatre, I; 33. Combat: the northern theatre, I; 34. Combat: the northern theatre, II; 35. Saratoga; 36. Combat: the western theatre, II; 37. 'West' in the middle; 38. Combat: the southern theatre; 39. Yorktown; Part IV. The Clone Establishes its Form: 40. What next?; 41. Land; 42. People; 43. Power; Part V. More Conquests: 44. Climax; 45. In sum.
GOR010630384
9780521662550
0521662559
The Creation of America: Through Revolution to Empire by Francis Jennings
Francis Jennings
Used - Very Good
Hardback
Cambridge University Press
2000-08-28
354
N/A
Book picture is for illustrative purposes only, actual binding, cover or edition may vary.
This is a used book - there is no escaping the fact it has been read by someone else and it will show signs of wear and previous use. Overall we expect it to be in very good condition, but if you are not entirely satisfied please get in touch with us
Trustpilot