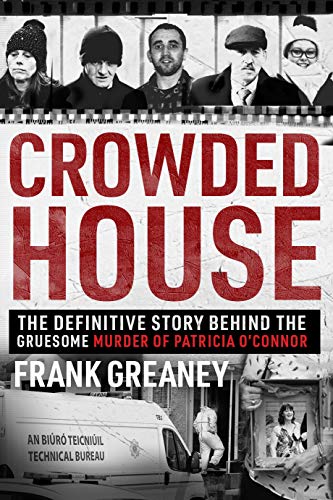 The compelling story of how a family under pressure turned on itself with fatal consequences.

Crowded House: The definitive story behind the gruesome murder of Patricia O'Connor by Frank Greaney

In June 2017, a woman out picnicking in the Wicklow Mountains stumbled upon something in a ditch that would set in motion a chain of events that horrified the nation. It was the first of fifteen dismembered body parts belonging to retired hospital worker Patricia O'Connor.

Kieran Greene, the father of three of Patricia's grandchildren, later handed himself in, confessing to beating her to death in the home they shared in what he said was an act of self-defence. He also confessed to dismembering her and disposing of her remains but later changed his story, implicating several members of Patricia's household, including her husband and daughter.

In this nuanced and meticulous account of a deeply disturbing crime, journalist Frank Greaney, who covered every day of the shocking trial and conducted exclusive follow-up interviews with other members of Patricia's family, uncovers the story behind the gruesome murder of Patricia O'Connor, and looks at who Patricia really was.

'I read your book in one sitting yesterday, that's how compelling it is.' Pat Kenny

Frank Greaney is an award-winning journalist and broadcaster. As Courts Correspondent for Newstalk and Today FM, he has covered some of the most shocking cases to come before the courts in recent years, including the Graham Dwyer murder trial, the Belfast rape trial and the harrowing murder of Ana Kriegel.

GOR011370612
9780717190263
0717190269
Crowded House: The definitive story behind the gruesome murder of Patricia O'Connor by Frank Greaney
Frank Greaney
Used - Very Good
Paperback
Gill
2020-10-23
320
N/A
Book picture is for illustrative purposes only, actual binding, cover or edition may vary.
This is a used book - there is no escaping the fact it has been read by someone else and it will show signs of wear and previous use. Overall we expect it to be in very good condition, but if you are not entirely satisfied please get in touch with us
Trustpilot