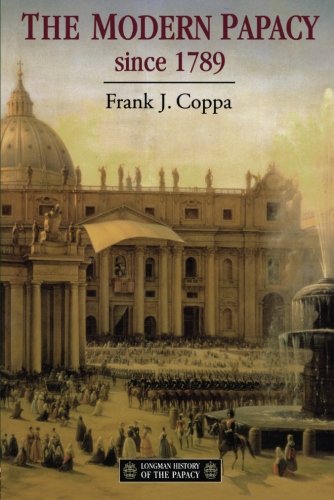 Out of Stock
$27.49
inc. GST
This survey launches a major five-volume series exploring the history of the papacy. This initial volume runs from the French Revolution to the fall of the Soviet Union. Its central theme is the response of this most ancient of institutions to the modern secular age.
Very Good
Only 0 left

This ambitious survey launches a major new five-volume series. It explores the response of the papacy, one of the world's longest-enduring institutions, to the multiplying challenges of the modern age. It runs from the French Revolution to the fall of the Soviet Union, ending with the pontificate of John Paul II, the first non-Italian pope since 1522. Frank Coppa examines the impact of major events like the Napoleonic conquests, Italian unification, two World Wars and the Cold War; he explores the attitudes of the papacy to such issues as liberalism, nationalism, fascism, communism and the modern, secular age; he examines the growing concern of the popes for the Catholic world beyond its traditional European home; and he tackles, objectively and judiciously, contentious topics like the "silence" of Pius XII. Engrossingly readable, the book offers a fresh and invigorating perspective on international relations across the past two centuries, and on the political and ideological emergence of the modern world, as well as its specifically papal concerns.

1. Introduction: The Papacy in an Age of Ideologies.
2. The Chair of Peter Confronts the French Revolution, 1789-1799: A Turbulent Decade.
3. The Papacy and Napoleonic France: From Compromise to Confrontation, 1800-1814.
4. Rome: From Restoration to Revolution, 1815-1831.
5. The Holy See and the First Crisis of Modernization, 1831-1846.
6. The Holy See in a Turbulent Decade, 1846-1856.
7. Papal Intransigence and Infallibility in an Age of Liberalism and Nationalism.
8. Rome's Attempt at Accommodation with the Modern World, 1878-1903.
9. The Vatican's Condemnation of Americanism and Modernism.
10. Papal Diplomacy and the Quest for Peace During and after World War One.
11. The Vatican Between the Democracies and the Dictatorships in the Interwar Period.
12. The Diplomacy and `Silence' of Pope Pius XII During World War Two.
13. The Holy See and Cold War in Transition.
14. Aggiornamento and the Opening of Vatican II: Reconciliation of the Papacy with the Modern World.
15. The Papacy in the Age of Transition: The Pontificate of Paul VI.
16. The Year of Three Popes and Beyond: The Contemporary Papacy.
17. Conclusion: Past, Present and Future Prospects for the Papacy.
Endnotes.
Bibliography.

GOR005249349
The Modern Papacy, 1798-1995 by Frank J. Coppa
Frank J. Coppa
Longman History of The Papacy
Used - Very Good
Paperback
Pearson Education Limited
1998-10-27
304
0582096308
9780582096301
N/A
Book picture is for illustrative purposes only, actual binding, cover or edition may vary.
This is a used book - there is no escaping the fact it has been read by someone else and it will show signs of wear and previous use. Overall we expect it to be in very good condition, but if you are not entirely satisfied please get in touch with us.