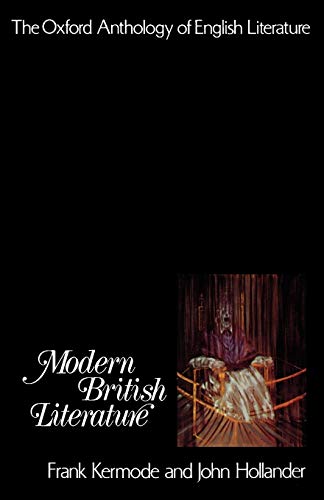 This volume includes Shaw's St. Joan, twenty poems by Hardy, thirty by Yeats, Conrad's Heart of Darkness, and Lawrence's The Prussian Officer, the complete St. Mawr, Pornography and Obscenity, and eleven poems. It also features Joyce's The Dead, excerpts from The Portrait of the Artist, Ulysses, and Finnegan's Wake, and works by T. S. Eliot, including The Waste Land and Little Gidding.

"The only game in town."--Robert Murray Davis, University of Oklahoma "The most comprehensive anthology of Modern British Literature I've come across so far."--Immaculate Kizza, University of Tennessee "Excellent historical and literary background in introductions to each section."--Judith L. Johnson, Rider College "A good mix of poetry and prose, especially in the non-fiction area."--Frederick S. Lapisardi, California University of Pennsylvania

GOR001194269
Modern British Literature: The Oxford Anthology of English Literature by Frank Kermode
Frank Kermode
Used - Good
Paperback
Oxford University Press Inc
1973-04-05
768
0195016521
9780195016529
N/A
Book picture is for illustrative purposes only, actual binding, cover or edition may vary.
This is a used book - there is no escaping the fact it has been read by someone else and it will show signs of wear and previous use. Overall we expect it to be in very good condition, but if you are not entirely satisfied please get in touch with us.