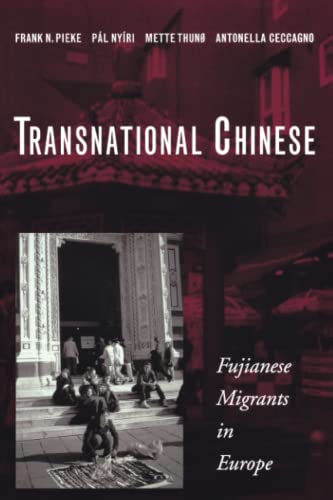 Out of Stock
$46.99
inc. GST
This book investigates the origins and mechanics of recent Chinese migration, focusing on the work and life of Fujianese migrants in the United Kingdom, Hungary, and Italy, and exploring the many transnational spaces that connect Fujianese across Europe, the United States, and China.
Very Good
Only 0 left

In the 1990s, societies across the world were confronted with a sudden mass inflow of Chinese migrants. Transnational Chinese investigates the global nature of this migration by focusing on one of the fastest growing groups of new Chinese international migrants: those from Fujian province in southern China. It specifically focuses on Fujianese migration to Europe, where a broad range of immigration regimes has provided various incentives and disincentives that have influenced their migratory patterns across the continent. Applying intensive, multisited fieldwork research in the United Kingdom, Hungary, and Italy, as well as sending areas in Fujian, Transnational Chinese investigates the origins and mechanics of Fujianese migration, the work and life of Fujianese migrants in Europe, and the many transnational spaces that connect Fujianese across Europe, the United States, and China.

"This outstanding collaborative ethnographic study of Chinese transnationalism will be an essential resource for any future research and teaching on the subject." -- Journal of Anthropological Research
"This book makes important theoretical and methodological contributions to the study of immigration in comparative perspective. Theoretically, the book's argument gives us fresh ideas for understanding globalization and Chinese immigration . . . The book's new arguments are thoughtful and well articulated . . . [T]he books sets and example of a new type of scholarship in that it makes crucial research materials (case files, interview notes, and field notes) publicly available, a practice that ought to be followed by other researchers." -- American Journal of Sociology
"This book has a lot to offer to scholars on contemporary China who are following the discussion on Chinese globalization, and to specialists on the Chinese diaspora who are seeing the subject transform before their eyes. These researchers have offered a very fine model of scholarly collaboration." -- China Review International
"Overall, this is a refreshing book . . . It provides an interesting argument about Chinese globalization by examining Fujianese migration to Europe." -- Canadian Journal of Sociology Online

Frank N. Pieke is University Lecturer in the Modern Politics and Society of China and a Fellow of St. Cross College, University of Oxford. Pal Nyiri is Senior Fellow in the Humanities Center at Central European University, Budapest. Mette Thuno is Associate Professor at the Department of Asian Studies, University of Copenhagen. Antonella Ceccagno is Researcher of Chinese Language and Culture at the University of Bologna, Italy. She is also Operational Director of the Center for Immigration Research and Services in Prato, Tuscany.

GOR010196920
Transnational Chinese: Fujianese Migrants in Europe by Frank N. Pieke
Frank N. Pieke
Used - Very Good
Paperback
Stanford University Press
2004-01-25
272
0804749957
9780804749954
N/A
Book picture is for illustrative purposes only, actual binding, cover or edition may vary.
This is a used book - there is no escaping the fact it has been read by someone else and it will show signs of wear and previous use. Overall we expect it to be in very good condition, but if you are not entirely satisfied please get in touch with us.