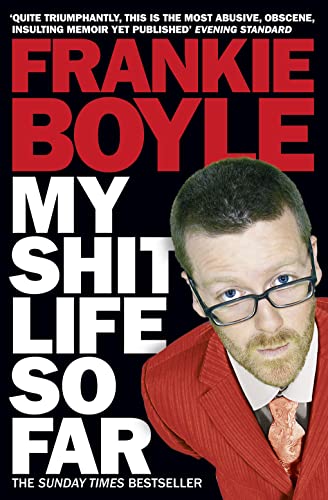 My Shit Life So Far
by Frankie Boyle

Ever since being brought up by The Beatles, Frankie Boyle has been a tremendous liar. Join him on his adventures with his chum Clangy The Brass Boy and laugh as he doesn't accidentally kill a student nurse when a party gets out of hand.

My Shit Life So Far Summary

My Shit Life So Far by Frankie Boyle

Ever since being brought up by The Beatles, Frankie Boyle has been a tremendous liar. Join him on his adventures with his chum Clangy The Brass Boy and laugh as he doesn't accidentally kill a student nurse when a party gets out of hand.

I don't think anyone can have written an autobiography without at some point thinking "Why would anyone want to know this shit?" I've always read them thinking "I don't want to know where Steve Tyler grew up, just tell me how many groupies he f**ked!"'

Outspoken, outrageous and brilliantly inappropriate, Frankie Boyle, the dark heart of Mock the Week, says the unsayable as only he can. From the TV programmes he would like to see made ('Celebrities On Acid On Ice: just like Celebrity Dancing On Ice, but with an opening sequence where Graham Norton hoses the celebrities down with liquid LSD'), to his native Scotland and the Mayor of London ('voting for Boris Johnson wasn't that different to voting for a Labrador wearing a Wonder Woman costume'), nothing and no one is safe from Frankie's fearless, sharp-tongued assault.

Sharply observed and full of taboo-busting, we-really-shouldn't-be-laughing-at-this humour, My Shit Life So Far shows why Frankie Boyle really is the blackest man in show business.

My Shit Life So Far Reviews

`If you like Harry Potter and the Da Vinci Code, why are you even looking at this, you retard?'
Jimmy Carr

`If you are suffocating in cosy Christmas cheer, this abrasively cynical, relentlessly misanthropic book might feel like a welcome faceful of ice-cold water straight out of the Clyde.'
The Sunday Times

`Quite triumphantly, this is the most abusive, obscene, insulting memoir yet published...Many, many funny lines here. A difficult book to read sedately in public.'
The Evening Standard

`He has a shocking, acid-tongued wit and his sharp observations make this one of the funniest autobiographies I've read.'
The Sun

`an original mix of confession and stand-up monologue ... it's rather gratifying that it's outselling most of the books by more famous figures.'
The Guardian

`a refreshing antidote to the usual feelgood books by TV stars.'
The Independent

`My Shit Life So Far, showcases that cruel and unusual comedy that's become Frankie's trademark, and should probably be enjoyed far away from hot liquids... bizarre, intelligent and abusively hilarious.'
**** The List

`Fans of Boyle's dark style will hope this book provides laughs-a-plenty and an antidote to the play-it-safe, sickly sweet autobiographies of other so-called celebrities. They will not be disappointed.'
Dave TV

`Only read this book in public if you have no qualms about blowing coffee through your nose in spurts of guilty laughter ... Punchier than a cage fighter, with more disclosures than an episode of Parky ... Addictive and expertly brutal.'
Hotline

Francis Martin Patrick 'Frankie' Boyle was born in Glasgow in 1972. Most recognised for this regular spot on BBC 2's Mock the Week, Frankie's cruel but perfectly constructed gags on politicians, celebrities and society as a whole have cemented his name in the world of comedy.' John Prescott is so fat, that he can't put a tie and belt on without turning into sausages.' Nice.

GOR010460450
My Shit Life So Far by Frankie Boyle
Frankie Boyle
Used - Like New
Paperback
HarperCollins Publishers
2010-06-10
304
0007324510
9780007324514
N/A
Book picture is for illustrative purposes only, actual binding, cover or edition may vary.
The book has been read, but looks new. The book cover has no visible wear, and the dust jacket is included if applicable. No missing or damaged pages, no tears, possible very minimal creasing, no underlining or highlighting of text, and no writing in the margins.