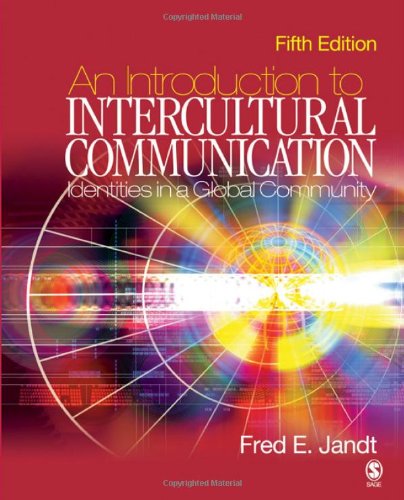 An Introduction to Intercultural Communication
by Fred E. Jandt

Used Price
$30.99
inc. GST
Free Shipping in Australia
Covers a range of material including a historical framework to view the development of the topics; an integration of media as a variable in the advancement of issues and ideas; and illustrative material, such as vignettes, quotes, cases, and stories to keep the student's attention and provoke thought while challenging existing viewpoints.
Reviews:
Trustpilot
Very Good

An Introduction to Intercultural Communication Summary

An Introduction to Intercultural Communication: Identities in a Global Community by Fred E. Jandt

This easy-to-read volume covers a wide range of material including a historical framework to view the development of current topics; an integration of media as a variable in the advancement of issues and ideas; and illustrative material, such as vignettes, quotes, cases, and stories to keep the student's attention and provoke thought while challenging existing viewpoints. It walks the student through the key concepts of communication and culture with chapters on barriers to intercultural communication; dimensions of culture; multiculturalism; women, family, and children; and culture's influence on perception.

New to the Fifth Edition:

Fred E. Jandt was born of second-generation German immigrants in the multicultural south-central region of Texas. After graduating from Texas Lutheran University and Stephen F. Austin State University, he received his doctorate in communication from Bowling Green State University. He has taught and been a student of intercultural communication for more than 40 years, developing his experience through travel and international training and research projects. While Professor of Communication at The College at Brockport, State University of New York, his reputation as a teacher led to his appointment as SUNY's first director of faculty development. He has retired as Dean of the Palm Desert Campus and Professor of Communication at California State University, San Bernardino, where he was named Outstanding Professor. He has also been a visiting professor at Victoria University of Wellington in New Zealand. He has extensive experience in the areas of intercultural and international communication, negotiation mediation, and conflict management. He was one of the first scholars to introduce the study of conflict to the communication discipline with his text Conflict Resolution Through Communication (Harper & Row, 1973). He has subsequently published many other titles in this area, including the successful trade books Win-Win Negotiating: Turning Conflict Into Agreement (Wiley, 1985), which has been translated into eight languages, and a casebook on international conflict management, Constructive Conflict Management: Asia-Pacific Cases (SAGE, 1996) with Paul B. Pedersen. For several years, he conducted the training workshop "Managing Conflict Productively" for major corporations and government agencies throughout the United States. Jandt continues to train volunteers who are learning to become mediators in the California justice system.

GOR006140510
An Introduction to Intercultural Communication: Identities in a Global Community by Fred E. Jandt
Fred E. Jandt
Used - Very Good
Paperback
SAGE Publications Inc
2006-10-04
464
1412914426
9781412914420
N/A
Book picture is for illustrative purposes only, actual binding, cover or edition may vary.
This is a used book - there is no escaping the fact it has been read by someone else and it will show signs of wear and previous use. Overall we expect it to be in very good condition, but if you are not entirely satisfied please get in touch with us.