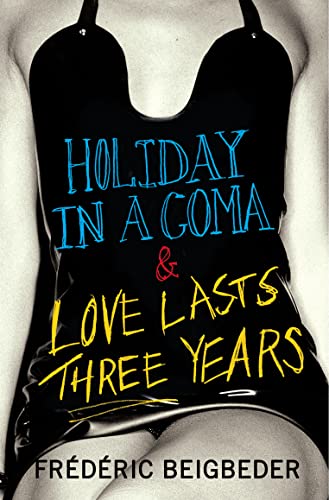 One night in a Parisian nightclub and the aftermath of a marriage provide the stories for these two novels by Frederic Beigbeder, award-winning author of `Windows on the World'.

One night in a Parisian nightclub and the aftermath of a marriage provide the stories for these two novels by Frederic Beigbeder, award-winning author of `Windows on the World'.

In `Holiday in a Coma', Marc Marronier, a shallow, superficial, rich Parisian who works as an advertising executive, is invited by his old friend to the opening of a new nightclub called The Shitter (a satirical take on the famous Paris nightclub Les Bains Douche). Taking place over a single unforgettable night, the novel documents everything from the pit-bull bouncer on the door, to the drugs, cocktails and wannabes who frequent the club, and Marc's attempts to seduce a catwalk model - any one will do. A catalogue of degeneracy, drugs, sex and decibels, `Holiday in a Coma' is written with a fury and passion that reflect the author's own relationship with a world and he both loves and loathes.

In `Love Lasts Three Years', Marc Maronnier has just been divorced and - shallow opportunist that he is - has decided to write a book about it. He has a theory that love lasts no more than three years, and here - recounting the highs and lows of his marriage and taking us through brash nightclubs, vainglorious offices and soulless designer apartments - he brings to bear the theoretical and the empirical to prove his point. Both frightening and funny, the book reads like a diary: sometimes tender and real, sometimes fantastical and cruel, peppered with Beigbeder's acerbic one-liners and trademark wit.

`A stylist of considerable talent...Holiday in a Coma reminds me of early Martin Amis - specifically the torture-filled, drug-riddled Dead Babies...In its subtle way, Love Last Three Years is just as artful as its predecessor. Narrated in the first person, Marc's candid description of being in love is so fresh that we almost feel his roiling emotions first hand. This is a difficult trick to pull off, but Beigbeder manages it magnificently.' Daily Telegraph

Praise for `Windows on the World':

`Thoughtful, self-deprecating, despairing, funny, infuriating and moving, while never undercutting or cheapening the horror of the doomed family.' Daily Telegraph

Frederic Beigbeder was born in 1965 and lives in Paris. He works as a publisher, literary critic and broadcaster. His novel `Windows on the World' won the 2005 Independent Foreign Fiction Prize.

GOR001644976
Holiday in a Coma & Love Lasts Three Years: two novels by Frederic Beigbeder by Frederic Beigbeder
Frederic Beigbeder
Used - Very Good
Paperback
HarperCollins Publishers
2008-06-02
240
0007229038
9780007229031
N/A
Book picture is for illustrative purposes only, actual binding, cover or edition may vary.
This is a used book - there is no escaping the fact it has been read by someone else and it will show signs of wear and previous use. Overall we expect it to be in very good condition, but if you are not entirely satisfied please get in touch with us.