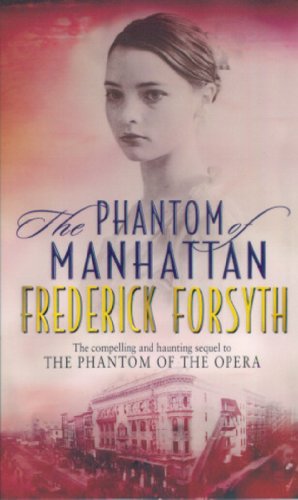 Phantom Of Manhattan
by Frederick Forsyth

Used Price
$17,99
inc. GST
Free Shipping in Australia
It was 1882 when Antoinette Giry, Maitresse du Corps de Ballet at the Paris Opera House, took her small daughter to the funfair at Neuilly. The creature - Erik - whose hideous face hid a brilliant brain of near-genius, was to become the Phantom of the Opera - magician, artists, musician, and lover.
Reviews:
Trustpilot
Very Good

Phantom Of Manhattan by Frederick Forsyth

It was 1882 when Antoinette Giry, Maitresse du Corps de Ballet at the Paris Opera House, took her small daughter to the funfair at Neuilly. And there, in a cage, she saw a filthy manacled creature whose tormented eyes shone from a grotesquely deformed face. It was Antoinette Giry who saved him, freed him, cured his wounds and finally let him find a dwelling place in the labyrinthine depths of the Opera House. The creature - Erik - whose hideous face hid a brilliant brain of near-genius, was to become the Phantom of the Opera - magician, artists, musician, and lover. When he tried to lure the object of his adoration to his underground domain - it was to end in tragedy. It was Madame Giry who saved him once more, set him on a ship to the New World - and there Erik Muhlheim began a new and secret life, a life that began in misery and poverty but in which his incredible skills finally carved out an unexpected kingdom of power. And there it was he learned again of Christine, whose life had changed dramatically since that night in the Paris Opera House. Inevitably, their paths must cross again in the old sequence of tragedy and triumph. The Phantom, one of the most mysterious and romantic figures ever created, soars again in a world of his own making. Frederick Forsyth's magnificent and evocative story adds a new dimension to the legend of the Phantom.

"'Frederick Forsyth not only captures the spirit and style of Gaston Leroux's original novel, but also the romance and thrills that make the Phantom such an alluring character'" -- Andrew Lloyd-Webber
"'A gripping, one-sitting read that reveals Forsyth in a surprising and beguiling new light'" * Sunday Telegraph *

GOR001289564
Phantom Of Manhattan by Frederick Forsyth
Frederick Forsyth
Used - Very Good
Paperback
Transworld Publishers Ltd
2000-09-01
256
0552147192
9780552147194
N/A
Book picture is for illustrative purposes only, actual binding, cover or edition may vary.
This is a used book - there is no escaping the fact it has been read by someone else and it will show signs of wear and previous use. Overall we expect it to be in very good condition, but if you are not entirely satisfied please get in touch with us.