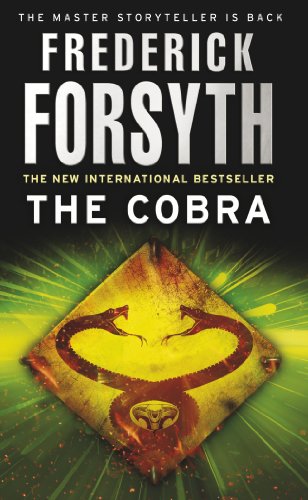 The Cobra
by Frederick Forsyth

In Stock
$15.49
inc. GST
AN UNWINNABLE WARCocaine is worth billions of dollars a year to the drug cartels who spread their evil seed across Western society.A MAN ON A MISSIONEx-CIA special ops, Paul Devereux, intellectual, dedicated and utterly ruthless, is given what seems like an impossible task: Stop the drug barons, whatever it costs.
Like New Very Good
Only 2 left

The Cobra by Frederick Forsyth

AN UNWINNABLE WAR Cocaine is worth billions of dollars a year to the drug cartels who spread their evil seed across Western society. It causes misery, poverty and death. And slowly its power is spreading... A MAN ON A MISSION Ex-CIA special ops, Paul Devereux, intellectual, dedicated and utterly ruthless, is given what seems like an impossible task: Stop the drug barons, whatever it costs. At his disposal, anything he wants - men, resources, money. He must assemble a team equal to the lawless men who control this deadly trade. AN UNTHINKABLE SOLUTION Up to now the drug cartels have had it their way. Up to now, the forces of law and order have played by the rules. That is about to change. Those rules no longer apply... and a dirty war is about to get a whole lot dirtier...

"The Cobra creates a vividly cinematic picture of the worldwide cocaine trade. Forsyth has recharged his batteries, producing his most ambitious novel in years by reproducing the minutely organised detail of his most famous book." -- Barry Forshaw * Daily Express *
"As ever with Forsyth, there is an impressive command of armed weaponry as well as an utterly believable story that moves along at a breakneck pace...Extraordinarily impressive." * Daily Mail *
"Forsyth has produced his most ambitious book in years, reproducing the minutely organised detail of The Day of the Jackal." * Good Book Guide *
"This new blockbuster from one of the world's sharpest authors is everything a modern thriller should be and more!" * Bury Free Press *

GOR008103389
The Cobra by Frederick Forsyth
Frederick Forsyth
Used - Like New
Paperback
Transworld Publishers Ltd
2011-04-14
448
0552159905
9780552159906
N/A
Book picture is for illustrative purposes only, actual binding, cover or edition may vary.
This is a used book - there is no escaping the fact it has been read by someone else and it will show signs of wear and previous use. Overall we expect it to be in very good condition, but if you are not entirely satisfied please get in touch with us.