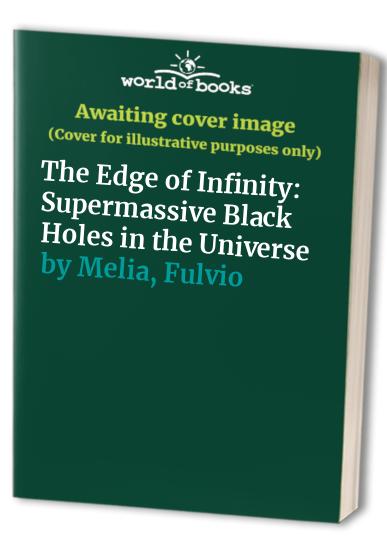 The Edge of Infinity
by Fulvio Melia (University of Arizona)

In Stock
$22.49
inc. GST
Recent discoveries indicate that supermassive black holes may have been critical to the formation of structure in the early universe, spawning bursts of star formation, planets, and even life itself. This fascinating and timely book is suitable for the general reader.
Very Good
Only 2 left

The Edge of Infinity Summary

The Edge of Infinity: Supermassive Black Holes in the Universe by Fulvio Melia (University of Arizona)

In the past, they were recognized as the most destructive force in nature. Now, following a cascade of astonishing discoveries, supermassive black holes have undergone a dramatic shift in paradigm. Astronomers are finding out that these objects may have been critical to the formation of structure in the early universe, spawning bursts of star formation, planets, and even life itself. They may have contributed as much as half of all the radiation produced after the Big Bang, and as many as 200 million of them may now be lurking through the vast expanses of the observable cosmos. In this elegant, non-technical account, Melia conveys for the general reader the excitement generated by the quest to expose what these giant distortions in the fabric of space and time have to say about our origin and ultimate destiny.

The Edge of Infinity Reviews

'Il libro di Fulvio Melia e ... un volumetto agile, ricco d'illustrazioni, in stile assolutamente divulgativo, ma con molti spunti originali e interessanti.' le Stelle
'... an interesting insight into the story of black hole research during the last few decades ... A recommended read.' Astronomy Now
'Melia is Professor of Astronomy at the University of Arizona and there is no doubt that he knows what he is talking about.' Journal of the British Astronomical Association
"Th[is] book is a quick read and a welcome addition to any black hole aficionado's bookshelf. Highly recommended." Choice

About Fulvio Melia (University of Arizona)

Fulvio Melia is Professor of Astronomy and Associate Head of Physics at the University of Arizona.

GOR004277399
The Edge of Infinity: Supermassive Black Holes in the Universe by Fulvio Melia (University of Arizona)
Fulvio Melia (University of Arizona)
Used - Very Good
Hardback
Cambridge University Press
2003-09-04
158
0521814057
9780521814058
N/A
Book picture is for illustrative purposes only, actual binding, cover or edition may vary.
This is a used book - there is no escaping the fact it has been read by someone else and it will show signs of wear and previous use. Overall we expect it to be in very good condition, but if you are not entirely satisfied please get in touch with us.