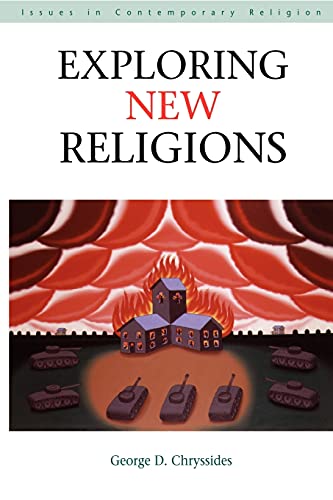 This account of a wide variety of new religions focuses on their origins, beliefs and practices in a dispassionate way, leaving readers to form their own value judgements.

New religious movements - popularly know as 'cults'- arouse strong public opinion and most books on the subject are polemical, giving hostile reaction rather than informed exploration. Exploring New Religions provides an account of a wide variety of new religions, focusing on their origins, beliefs and practices, which are set out in a compelling but dispassionate way, leaving readers to form their own judgements. Chryssides provides important analysis of the 'killer cults' - the Jonestown Peoples Temple, Waco, the Solar Temple and Heaven's Gate - and examines the factors that made their followers willing to die for their cause. Older groups like Jehovah's Witnesses and the Latter-Day Saints (Mormons) are discussed, and the author traces the development of a variety of strands of spirituality, ranging from New Thought to Transcendentalism and Theosophy. Subsequent chapters include: the Baha'i, The Family (formerly Children of God), the Hare Krishna Movement (ISKCON), The jesus Army, the Rastafarians, the Church of Scientology , Transcendental Meditation (TM) and the Unification Church ('the Moonies').Some less well-known groups are also featured: est (Erhard Seminar Training), the new Kadampa Tradition, Brahma Kumaris, Sai Baba, Subud and the Western Buddhist Order. Also included is a study of the New Age phenomenon, and an account of responses to new religions, at religious, societal and political levels. This is an important new study of new religious movements, which should prove invaluable to scholars,students and clergy as well ak to those whose lives have been affected by new religions. George D. Chryssides is Senior Lecturer in Religious Studies at the University of Wolverhampton. He has had many years of direct acquaintance with new religions, and has written extensively on the subject. His definitive work on the Unification Church, The Advent of Sun Myung Moon, was published in 1991.
"General readers, sixth-formers and first-year university students might value it as a ground-clearing exercise prior to more detailed sociological or theological analyses."
"Reviewed in Theology, September/October 2000"

"This book will be invaluable in the study of NRM's [New Religious Movements], providing a wealth of data and description, alerting readers to significant approaches and issues. It is a valuable addition to the series "Issues in Contemporary Religion" and works admirably in that context."
"Reviews in Religion and Theology" 8.1 (February 2001)
"This volume will prove useful for introductory courses in the sociology of religion and on courses dealing with relatively new religious movements in general. It is packed with basic information on the founders and contexts of the emergence of groups and outlines basic teachings and practices of each."
Journal of Contemporary Religion, 16.1 (2001)
George D. Chryssides is Honorary Research Fellow in Contemporary Religion at the University of Birmingham, UK.
GOR003746992
9780826459596
0826459595
Exploring New Religions by George Chryssides
George Chryssides
Issues in contemporary religion
Used - Very Good
Paperback
Bloomsbury Publishing PLC
1999-11-25
415
N/A
Book picture is for illustrative purposes only, actual binding, cover or edition may vary.
This is a used book - there is no escaping the fact it has been read by someone else and it will show signs of wear and previous use. Overall we expect it to be in very good condition, but if you are not entirely satisfied please get in touch with us
Trustpilot