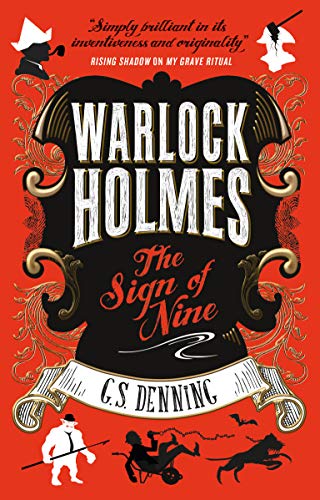 Warlock Holmes - The Sign of Nine
by G S Denning

Warlock Holmes - The Sign of Nine by G S Denning

"If you ever wondered how much better Sherlock would be if people could hurl hellfire at each other, well this one is for you." Starburst Magazine on A Study in Brimstone Warlock Holmes may have demons in his head, but now Dr. John Watson has a mummy in his bloodstream. Specifically that of the sorcerer Xantharaxes, who when shredded and dissolved in an 8% solution, results in some extremely odd but useful prophetic dreams. There's also the small matter of Watson falling for yet another damsel-du-jour, and Warlock deciding that his companion needs some domestic bliss...

"Fantasy and science fiction have never met a Sherlock Holmes retelling they didn't like, and this is a good one" - Barnes & Noble SFF Blog

"a refreshingly modern (in terms of manners, if not setting) and hilarious paranormal take that I recommend to anyone who enjoys mysteries + humor + weird fiction" - The Frumious Consortium

"I can always count on G.S. Denning's sense of humor to make me laugh, and I was definitely not disappointed!...even just the first chapter had rolling with laughter" - The BiblioSanctum

"addictive and compelling escapism for readers who want to treat themselves to an enjoyable reading experience filled with humour, fantasy and mystery" - RisingStar

G.S. Denning is the author of the acclaimed Sherlock-fantasy mashup series Warlock Holmes, including Warlock Holmes: A Study in Brimstone and Warlock Holmes: The Hell-Hound of the Baskervilles. He has a background in improv and has performed with Ryan Stiles and Wayne Brady. He lives in Las Vegas with his wife and two children.

GOR009848049
Warlock Holmes - The Sign of Nine by G S Denning
G S Denning
Used - Very Good
Paperback
Titan Books Ltd
2019-05-21
400
1785659367
9781785659362
N/A
Book picture is for illustrative purposes only, actual binding, cover or edition may vary.
This is a used book - there is no escaping the fact it has been read by someone else and it will show signs of wear and previous use. Overall we expect it to be in very good condition, but if you are not entirely satisfied please get in touch with us.