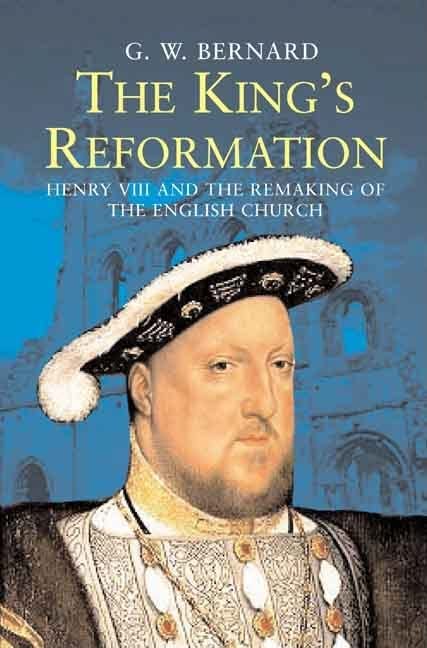 The King?s Reformation
by G.W. Bernard

In Stock
$44.99
inc. GST
Henry VIII's reformation remains among the most crucial yet misunderstood events in English history. This work presents the king as neither confused nor a pawn in the hands of manipulative factions. Henry, a monarch who ruled as well as reigned, is revealed instead as the determining mover of religious policy throughout this momentous period.
Like New
Only 1 left

The King?s Reformation: Henry VIII and the Remaking of the English Church by G.W. Bernard

A major reassessment of England's break with Rome

Henry VIII's reformation remains among the most crucial yet misunderstood events in English history. In this substantial new account G. W. Bernard presents the king as neither confused nor a pawn in the hands of manipulative factions. Henry, a monarch who ruled as well as reigned, is revealed instead as the determining mover of religious policy throughout this momentous period. In Henry's campaign to secure a divorce from Catherine of Aragon, which led him to break with Rome, his strategy, as Bernard shows, was more consistent and more radical than historians have allowed. Henry refused to introduce Lutheranism, but rather harnessed the rhetoric of the continental reformation in support of his royal supremacy. Convinced that the church needed urgent reform, in particular the purging of superstition and idolatry, Henry's dissolution of the monasteries and the dismantling of the shrines were much more than a venal attempt to raise money. The king sought a middle way between Rome and Zurich, between Catholicism and its associated superstitions on one hand and the subversive radicalism of the reformers on the other. With a ruthlessness that verged on tyranny, Henry VIII determined the pace of change in the most important twenty years of England's religious development.

"'This is a brave book, tilting at many windmills, challenging many received ideas. It will certainly stimulate discussion... Everyone interested in the Tudor Reformation will therefore want to read this book.' Eamon Duffy, The Tablet 'If Bernard fails to turn consensus around, it will not bother him too much. Throughout this massively learned book, as in much of his other writing, he is the only one in step... Bernard strikes out on his own, and sees Henry as the guiding light through all this encircling gloom.' Patrick Collinson, London Review of Books 'A model of meticulous research' Alastair Hamilton, Times Literary Supplement 'Professor Bernard writes in elegant trenchant English. He orders a mass of material with lucidity... This massive history, the fruit of a lifetime of research and reflection, is a work of exceptional interest and importance.' The Spectator 'A bold and strikingly original book.' Andrew Pettegree, History Today '... the book is a superb achievement. It advances an extraordinarily skilled understanding of the intricate relationship of religious belief, religious life, political necessity and political opposition. It will infuriate a great many people, but inspire a great many more.' Lucy Wooding, Literary Review"

G.W. Bernard is professor of early modern history at the University of Southampton. His books include Power and Politics in Tudor England.

GOR008353893
The King?s Reformation: Henry VIII and the Remaking of the English Church by G.W. Bernard
G.W. Bernard
Used - Like New
Paperback
Yale University Press
2007-08-17
672
0300122713
9780300122718
N/A
Book picture is for illustrative purposes only, actual binding, cover or edition may vary.
The book has been read, but looks new. The book cover has no visible wear, and the dust jacket is included if applicable. No missing or damaged pages, no tears, possible very minimal creasing, no underlining or highlighting of text, and no writing in the margins.