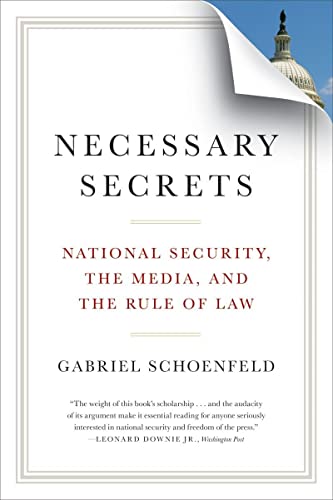 In Stock
$32.99
inc. GST
"Essential reading for anyone seriously interested in national security and freedom of the press." -Leonard Downie Jr., Washington Post
Good
Only 1 left

Necessary Secrets: National Security, the Media, and the Rule of Law by Gabriel Schoenfeld

Gabriel Schoenfeld "brilliantly illuminates" (Wall Street Journal) a growing rift between a press that sees itself as the heroic force promoting the public's "right to know" and a government that needs to safeguard information vital to the effective conduct of foreign policy. A masterful contribution to the enduring challenge of interpreting the First Amendment, Necessary Secrets offers a gripping account of how our national security, now and across the American past, has been compromised by disclosure of classified information.

"Accurately titled, well documented, and persuasive." -- Hayden B. Peake - CIA, The Intelligence Officer's Bookshelf
"A subtle and instructive brief...Scrupulously honest." -- Alan M. Dershowitz - New York Times Book Review
"Essential reading for anyone seriously interested in national security and freedom of the press in these testing times." -- Leonard Downie Jr. - Washington Post
"Illuminating, extremely intelligent, learned, engaging, and important. This is a truly great book...centrally relevant to manifold national-security debates today." -- Jack Goldsmith, author of The Terror Presidency
"An intellectually muscular argument that chisels away at some cherished myths...A timely, sure-to-be-controversial take on a problem that has no easy resolution." -- Kirkus Reviews, starred review
"[A] provocative consideration of the conflict between the need for government secrecy and the role of a free press....succeeds in scrutinizing an issue of vital importance and putting it into a much broader context." -- Publishers Weekly

Gabriel Schoenfeld is a Senior Fellow at the Hudson Institute in Washington, D.C. and a resident scholar at the Witherspoon Institute in Princeton, New Jersey. His essays on national security and modern history have appeared in leading publications including the New York Times, the Wall Street Journal, the Los Angeles Times, the Washington Post, the Weekly Standard, the New Republic, the Atlantic, the National Interest, and Commentary, where he was senior editor from 1994 to 2008. Schoenfeld holds a PhD in political science from Harvard University.

GOR010334233
Necessary Secrets: National Security, the Media, and the Rule of Law by Gabriel Schoenfeld
Gabriel Schoenfeld
Used - Good
Paperback
WW Norton & Co
2011-05-13
320
0393339939
9780393339932
N/A
Book picture is for illustrative purposes only, actual binding, cover or edition may vary.
The book has been read but remains in clean condition. All pages are intact and the cover is intact. Some minor wear to the spine.