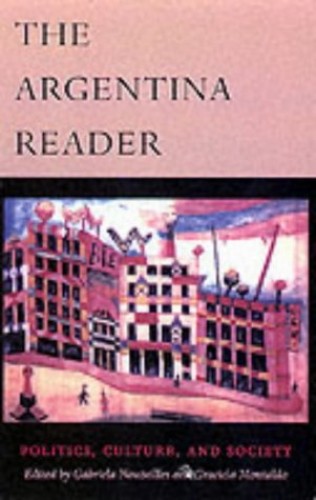 The Argentina Reader
by Gabriela Nouzeilles

Excessively European, refreshingly European, not as European as it looks, struggling to overcome a delusion that it is European. Argentina-in all its complexity-has often been obscured by variations of the "like Europe and not like the rest of Latin America" cliche. The Argentina Reader deliberately breaks from that viewpoint. This essential introduction to Argentina's history, culture, and society provides a richer, more comprehensive look at one of the most paradoxical of Latin American nations: a nation that used to be among the richest in the world, with the largest middle class in Latin America, yet one that entered the twenty-first century with its economy in shambles and its citizenry seething with frustration.

This diverse collection brings together songs, articles, comic strips, scholarly essays, poems, and short stories. Most pieces are by Argentines. More than forty of the texts have never before appeared in English. The Argentina Reader contains photographs from Argentina's National Archives and images of artwork by some of the country's most talented painters and sculptors. Many selections deal with the history of indigenous Argentines, workers, women, blacks, and other groups often ignored in descriptions of the country. At the same time, the book includes excerpts by or about such major political figures as Jose de San Martin and Juan Peron. Pieces from literary and social figures virtually unknown in the United States appear alongside those by more well-known writers such as Jorge Luis Borges, Ricardo Piglia, and Julio Cortazar.

The Argentina Reader covers the Spanish colonial regime; the years of nation building following Argentina's independence from Spain in 1810; and the sweeping progress of economic growth and cultural change that made Argentina, by the turn of the twentieth century, the most modern country in Latin America. The bulk of the collection focuses on the twentieth century: on the popular movements that enabled Peronism and the revolutionary dreams of the 1960s and 1970s; on the dictatorship from 1976 to 1983 and the accompanying culture of terror and resistance; and, finally, on the contradictory and disconcerting tendencies unleashed by the principles of neoliberalism and the new global economy. The book also includes a list of suggestions for further reading.

The Argentina Reader is an invaluable resource for those interested in learning about Argentine history and culture, whether in the classroom or in preparation for travel in Argentina.

"[It is] impossible to find a better introduction to the labyrinth, enigma, and delight that is Argentina, from the first sightings to the latest curses. Splendid and indispensable!"-Ariel Dorfman
"Conveying the complex enigmatic contradiction that is Argentina in the pages of a book is accomplished in this installment of Duke's 'Latin America Readers' series. . . . the editors provide ample context for any reader to appreciate Argentina's rich culture and history. . . . From sports and arts to history and politics this is a welcome and timely addition to our understanding of Argentina." -- Teo Ballve * NACLA Report on the Americas *
"[T]he best introduction for English readers to [Argentina's] history, culture, and society. . . . [T]his collection subtly conveys the admirable and loathsome qualities of a complicated and in many ways unfathomable society." -- Benjamin Schwarz * Atlantic Monthly *
"Wide-ranging. . . . [A]n excellent starting point for further reading. . . . [H]ighly recommended." * Rough Guide to Argentina *
"The Argentina Reader is the third title-following The Peru Reader and The Brazil Reader-in the excellent series sponsored by the Consortium in Latin American Studies at the University of North Carolina and Duke University. . . . [A] very well crafted, well illustrated and consistently interesting volume. . . . [T]he volume reads effortlessly well, which speaks . . . of the skill of the translators, especially the main translator, Patricia Owen Steiner." -- John King * Journal of Latin American Studies *
"[A] timely addition to Duke's Latin America Readers series. . . .[P]rovide[s] a comprehensive view of this complex nation of some 37 million people. Recommended. . . ." * Library Journal *
"This impressive collection of articles and documents introduces the reader to the enigma that is Argentina. . . . A richer and more eclectic overview of the country and its people would be hard to find." -- Pushpinder Khaneka * The Guardian *

Graciela Montaldo is Professor of Languages and Literatures at the Universidad Simon Bolivar.

GOR010736190
The Argentina Reader: History, Culture, Politics by Gabriela Nouzeilles
Gabriela Nouzeilles
The Latin America Readers
Used - Like New
Paperback
Duke University Press
2002-12-20
600
082232914X
9780822329145
N/A
Book picture is for illustrative purposes only, actual binding, cover or edition may vary.
The book has been read, but looks new. The book cover has no visible wear, and the dust jacket is included if applicable. No missing or damaged pages, no tears, possible very minimal creasing, no underlining or highlighting of text, and no writing in the margins.