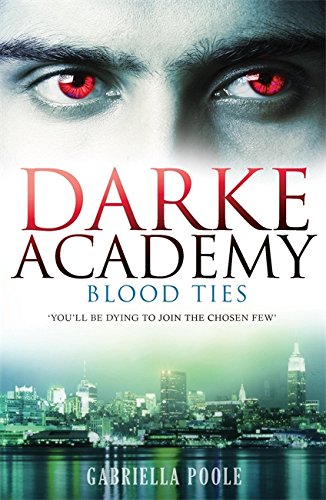 The Darke Academy is a school like no other. An elite establishment that moves to an exotic new city every term, its students are impossibly beautiful, sophisticated and rich.

This term the secretive Darke Academy has moved to New York, and Cassie Bell is no longer the innocent new girl. Now she is strong, determined, and hiding secrets of her own. For Cassie has been introduced to the world of the Few and is struggling to come to terms with her astonishing powers, a dangerous romance and the malevolent spirit inside her, demanding to be fed.

When an old enemy returns, bent on revenge, Cassie is tested to the limit. Can she rescue her friends from a horrific fate, or will she end up destroying them to save herself?

Wherever the Darke Academy goes, death is never far behind ...

The Darke Academy series is been written by experienced author Gabriella Poole and developed after extensive research with children by Hothouse Fiction (creators of the Darkside series for Scholastic, which won the Waterstone's Children's Book Prize in 2007).

GOR001877513
Blood Ties: Book 2 by Gabriella Poole
Gabriella Poole
Darke Academy
Used - Very Good
Paperback
Hachette Children's Group
2010-02-04
304
0340989254
9780340989258
N/A
Book picture is for illustrative purposes only, actual binding, cover or edition may vary.
This is a used book - there is no escaping the fact it has been read by someone else and it will show signs of wear and previous use. Overall we expect it to be in very good condition, but if you are not entirely satisfied please get in touch with us.