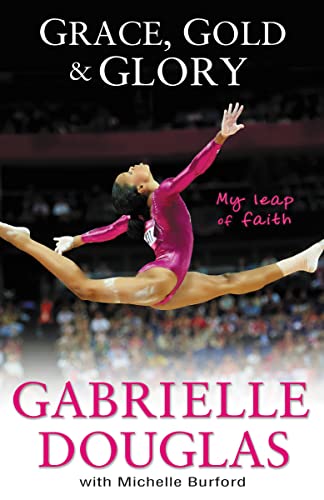 Grace, Gold, and Glory My Leap of Faith
by Gabrielle Douglas

In Stock
$20.49
inc. GST
Gold-winning US gymnast and Olympic All-Around champion Gabrielle Douglas tells her personal story of faith, perseverance, and determination, demonstrating you can reach your dreams if you let yourself soar.
Very Good Well Read
Only 3 left

Grace, Gold, and Glory My Leap of Faith Summary

Grace, Gold, and Glory My Leap of Faith by Gabrielle Douglas

The inspiring autobiography from Gabrielle Douglas-the first African-American gymnast in Olympic history to become the individual All-Around champion-revealing her journey from the time she first entered a gym to her gold-medal-winning performances.

In the 2012 London Olympics, US gymnast Gabrielle Douglas stole hearts and flew high as the All-Around Gold Medal winner and the brightest star of the US gold-medal-winning women's gymnastics team. That same year, Gabrielle was also named the 2012 Sportswoman of the Year by the Women's Sports Foundation.

In this personal autobiography, Grace, Gold, and Glory My Leap of Faith, Gabrielle tells her story of faith, perseverance, and determination. Walk with Gabby Douglas through her journey of faith and what her family overcame, from the time she first entered a gymnasium to her gold-medal-winning performances, demonstrating to readers ages 13 and up that they can reach their dreams when they let themselves soar.

Grace, Gold, and Glory My Leap of Faith:

Gabrielle Douglas is a two-time Olympic gold medalist. At the 2012 Summer Olympics, she made history, becoming the first US gymnast to take home a team and an individual gold medal in the same Olympics. Gabrielle began her training at age six, and became the Virginia State Champion only two years later. When she was fourteen, she left her family in Virginia Beach to train with coach Liang Chow in Des Moines, Iowa. Under Chow's guidance, and with tremendous faith in God's plan for her, Gabrielle competed in the Olympic Trials and walked away with the only guaranteed spot on the team. Since her Olympic triumph, Gabrielle has used her platform to inspire millions with a powerful message: With hard work and persistence, any dream is possible. Visit her online at www.gabrielledouglas.com Michelle Burford is a #1 New York Times bestselling collaborative writer and a founding editor of O, The Oprah Magazine. She is a Harvard-trained journalist whose work has taken her to more than 35 countries on six continents. A native of Phoenix, Michelle now resides in New York City. Visit her online at www.MichelleBurford.com

GOR006225884
Grace, Gold, and Glory My Leap of Faith by Gabrielle Douglas
Gabrielle Douglas
Used - Very Good
Hardback
Zondervan
2012-11-30
224
0310740614
9780310740612
N/A
Book picture is for illustrative purposes only, actual binding, cover or edition may vary.
This is a used book - there is no escaping the fact it has been read by someone else and it will show signs of wear and previous use. Overall we expect it to be in very good condition, but if you are not entirely satisfied please get in touch with us.