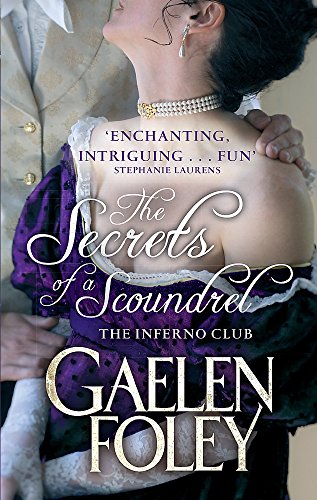 The Secrets of a Scoundrel
by Gaelen Foley

In Stock
$15.99
inc. GST
In The Secrets of a Scoundrel, New York Times bestselling author Gaelen Foley has created her most exciting Inferno Club novel yet!
Very Good Good Well Read
Only 3 left

The Secrets of a Scoundrel Summary

The Secrets of a Scoundrel: Number 7 in series by Gaelen Foley

Nick, Lord Forrester's reputation is legendary-both as a lethal warrior and a wicked lover. But when his rule-breaking ways land him in a Scottish dungeon he's left there to rot, until a mysterious lady visits his cell, offering him a way out.

All he must do is risk his neck on the mission she proposes-and obey her every command. One look at the luscious beauty has Nick ready to promise her anything, but he must resist his desire, or she could send him straight back to prison.

Virginia, Lady Burke, is well aware that the powerful ex-spy will try to take command of their quest, but it's her job to keep him under control. Yet how can she keep this untamable scoundrel under her thumb when all she really wants is to unleash the smoldering passion between them?

The Secrets of a Scoundrel Reviews

Foley has created a cast of characters readers adore and plotlines that captivate with lots of passion, danger, emotional intensity and romantic adventure. Readers won't be able to resist these gems of the genre in this latest edition, with its dashing hero, intrepid heroine and sprightly humour - Romantic TimesThe men of the Inferno Club have made their way into readers' hearts before, but none quite so smoothly as Lord Trevor Montgomery . . .a charming, heartwarming love story that pulls fans into the tale. - RT Book Reviews

Gaelen Foley's first novel was published in 1998 and she went on to win the Romantic Times Reviewers Choice Award for Best First Historical Romance. Many awards later this USA Today bestselling author is now published in ten languages.

GOR006041436
The Secrets of a Scoundrel: Number 7 in series by Gaelen Foley
Gaelen Foley
Inferno Club
Used - Very Good
Paperback
Little, Brown Book Group
2014-06-24
384
0749957565
9780749957568
N/A
Book picture is for illustrative purposes only, actual binding, cover or edition may vary.
This is a used book - there is no escaping the fact it has been read by someone else and it will show signs of wear and previous use. Overall we expect it to be in very good condition, but if you are not entirely satisfied please get in touch with us.