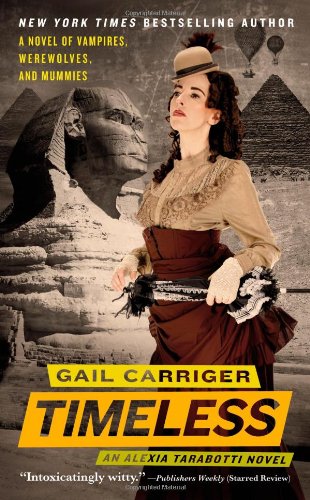 Alexia Tarabotti, Lady Maccon, has settled into domestic bliss. Of course, being Alexia, such bliss involves integrating werewolves into London High society, living in a vampire's second best closet, and coping with a precocious toddler who is prone to turning supernatural willy-nilly.

Until, that is, she receives a summons that cannot be ignored. With husband, child, and Tunstells in tow, Alexia boards a steamer to cross the Mediterranean. But Egypt may hold more mysteries than even the indomitable Lady Maccon can handle. What does the vampire Queen of the Alexandria Hive really want from her? Why is the God-Breaker Plague suddenly expanding? And how has Ivy Tunstell suddenly become the most popular actress in all the British Empire?
TIMELESS is the final book of the Parasol Protectorate series: a comedy of manners set in Victorian London, full of werewolves, vampires, dirigibles, and tea-drinking.
The Parasol Protectorate
Soulless
Changeless
Blameless
Heartless
Timeless

For more from Gail Carriger, check out:

"Spectacular debut novel...a real page-turner."--RT Book Reviews on Soulless
"Delivers what readers have come to expect: witty style paired with globe-spanning Victorian derring-do."--RT Book Reviews on Timeless
"Carriger's Parasol Protectorate series beautifully blends together alternate history, steampunk and paranormal romance into stories that are witty, engaging and fun."--Kirkus on Timeless
"Readers will undoubtedly be content with how this charming series wraps up."--SciFi Now on Timeless
"Soulless is a character-driven romp with great worldbuilding and delicious rapier wit that recalls Austen and P.G. Wodehouse."--io9.com on Soulless
"A delightfully fun supernatural comedy of manners, with a refreshing romance thrown in - and a highly promising first novel."--Locus on Soulless
"The world of Timeless is a unique recipe of steampunk and fantasy spiced with light sprinkling of romance. Its setting is rich for characters to romp about in, but the unbridled playfulness of the language and dialogue shines brightest."--Miami Herald on Timeless
New York Times bestselling author Gail Carriger writes to cope with being raised in obscurity by an expatriate Brit and an incurable curmudgeon. She escaped small town life and inadvertently acquired several degrees in Higher Learning. Ms. Carriger then traveled the historic cities of Europe, subsisting entirely on biscuits secreted in her handbag. She resides in the Colonies, surrounded by fantastic shoes, where she insists on tea imported from London.

GOR004087793
9780316127189
0316127183
Timeless by Gail Carriger
Gail Carriger
Parasol Protectorate (Paperback)
Used - Very Good
Paperback
Unknown
0
N/A
Book picture is for illustrative purposes only, actual binding, cover or edition may vary.
This is a used book - there is no escaping the fact it has been read by someone else and it will show signs of wear and previous use. Overall we expect it to be in very good condition, but if you are not entirely satisfied please get in touch with us
Trustpilot