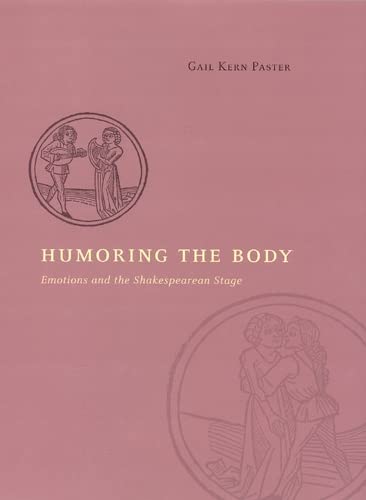 Humoring the Body: Emotions and the Shakespearean Stage by Gail Kern Paster

Though modern readers no longer believe in the four humors of Galenic naturalism blood, choler, melancholy, and phlegm early modern thought found in these bodily fluids key to explaining human emotions and behavior. In "Humoring the Body, "Gail Kern Paster proposes a new way to read the emotions of the early modern stage so that contemporary readers may recover some of the historical particularity in early modern expressions of emotional self-experience.
Using notions drawn from humoral medical theory to untangle passages from important moral treatises, medical texts, natural histories, and major plays of Shakespeare and his contemporaries, Paster identifies a historical phenomenology in the language of affect by reconciling the significance of the four humors as the language of embodied emotion. She urges modern readers to resist the influence of post-Cartesian abstraction and the disembodiment of human psychology lest they miss the body-mind connection that still existed for Shakespeare and his contemporaries and constrained them to think differently about how their emotions were embodied in a premodern world."

""Humoring the Body" challenges our familiar understanding of the relationship between early modern subjects and their surroundings. Paster reveals a Shakespearean landscape saturated in feeling. . . . Paster's book is lively, colourful and often very funny. Its most striking achievement is to reveal not only how Shakespeare's men and women inhabited the world, but also how the world inhabited them in return."
--Katherine Craik"Times Literary Supplement" (01/07/2004)

Gail Kern Paster is the former director of the Folger Shakespeare Library. She is the author of "The Idea of the City in the Age of Shakespeare "and "The Body Embarrassed: Drama and the Disciplines of Shame in Early Modern England."

GOR010867148
Humoring the Body: Emotions and the Shakespearean Stage by Gail Kern Paster
Gail Kern Paster
Used - Good
Hardback
The University of Chicago Press
2004-11-05
288
0226648478
9780226648477
N/A
Book picture is for illustrative purposes only, actual binding, cover or edition may vary.
The book has been read but remains in clean condition. All pages are intact and the cover is intact. Some minor wear to the spine.