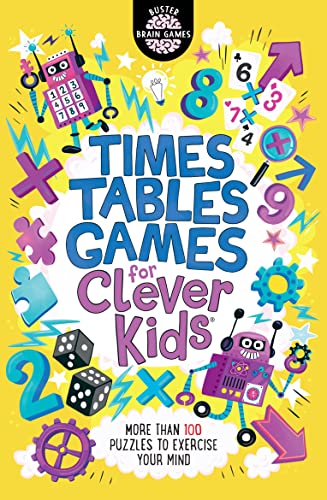 A fantastic follow-up to Brain Games for Clever Kids and new to our Clever Kids puzzle book series, this book is brimming with activities designed to help kids practise their times tables by solving super-fun multiplication-themed puzzles and games.

Kids can only work out the answer if they know their times tables! From dot-to-dot times tables and colour-by-multiplication activities to code puzzles, Calcudoku conundrums and number pyramids, there's plenty of content to bamboozle the brain and test those times tables.

From best-selling puzzle book author Gareth Moore, creator of the chart-topping success Brain Games for Clever Kids that has sold over 70,000 copies in the UK.

Gareth Moore (Author)
Dr Gareth Moore (B.Sc (Hons) M.Phil Ph.D) is the internationally bestselling author of a wide range of brain-training and puzzle books for both children and adults, including Anti-stress Puzzles, Ultimate Dot to Dot, Brain Games for Clever Kids, Lateral Logic, Extreme Mazes and The Ordinance Survey Puzzle Book. His books have sold over a million copies in the UK alone and have been published in 29 different languages.

He is also the creator of online brain-training site BrainedUp.com and runs the daily puzzle site PuzzleMix.com.

Chris Dickason (Author)
Chris Dickason's irreverent sense of humour was born from years as both a mild mannered doodler and angry burger flipper. Taking inspiration as much from Henri Matisse as he does The Muppets, as well as odd bits of packaging collected from foreign supermarkets, Chris' work has been described as charming and visually striking with a sharp graphic style. His illustrations are populated with rambunctious characters that are a cleverly crafted mix of an uncomplicated line style and wonky perspectives.

GOR010401354
Times Tables Games for Clever Kids by Gareth Moore
Gareth Moore
Buster Brain Games
Used - Like New
Paperback
Michael O'Mara Books Ltd
2018-08-09
192
1780555628
9781780555621
N/A
Book picture is for illustrative purposes only, actual binding, cover or edition may vary.
The book has been read, but looks new. The book cover has no visible wear, and the dust jacket is included if applicable. No missing or damaged pages, no tears, possible very minimal creasing, no underlining or highlighting of text, and no writing in the margins.