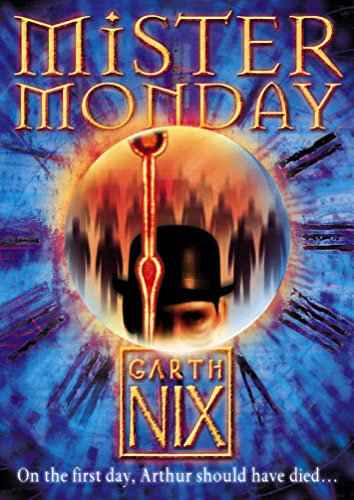 Breathtaking new magical adventure series from the author of Sabriel.

Mister Monday (The Keys to the Kingdom, Book 1) by Garth Nix

Breathtaking new magical adventure series from the author of Sabriel.

Seven days. Seven keys. Seven virtues. Seven sins. One mysterious house is the doorway to a very mysterious world - where one boy is about to venture and unlock a number of fantastical secrets.

Arthur Penhaligon is not supposed to be a hero. He is supposed to die an early death. But then his life is saved by a key shaped like the minute hand of a clock.

Arthur is safe - but his world is not. Along with the key comes a plague brought by bizarre creatures from another realm. A stranger named Mister Monday, his avenging messengers with bloodstained wings, and an army of dog-faced Fetchers will stop at nothing to get the key back - even if it means destroying Arthur and everything around him.

Desperate, Arthur escapes to the mysterious house that has appeared in town - a house that only he can see. Maybe there he can unravel the secrets of the key - and discover his true fate.

"I just loved Mister Monday, which is an amazing, no-holds-barred fantasy by Garth Nix. This is destined to be a cult series. Every chapter seems to bring something new and wonderful and ends with another surprise. In all honesty, I've never read anything quite like it and I simply can't wait for Tuesday." Anthony Horowitz

"Magic splashes across every page... With a likeable unlikely hero, fast-paced plotting and a plethora of mystical oddities, this series is sure to garner a host of fans." Publishers Weekly starred review

GOR000355670
Mister Monday (The Keys to the Kingdom, Book 1) by Garth Nix
Garth Nix
The Keys to the Kingdom
Used - Very Good
Paperback
HarperCollins Publishers
2004-01-05
448
0007175019
9780007175017
N/A
Book picture is for illustrative purposes only, actual binding, cover or edition may vary.
This is a used book - there is no escaping the fact it has been read by someone else and it will show signs of wear and previous use. Overall we expect it to be in very good condition, but if you are not entirely satisfied please get in touch with us.