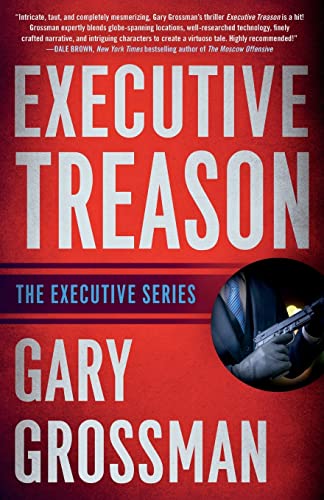 This second standalone thriller in the Executive Series-hailed by Dale Brown as "intricate, taut, and completely mesmerizing"-finds Secret Service Agent Scott Roarke confronted with Russian spycraft and murder in the White House.

"As topical as tomorrow's Internet blog...fast-paced, with vivid characters and a plot right off the front pages. Surprises you on every page. A winner."-LARRY BOND, New York Times bestselling author of Artic Gambit

The terrorists who came within a heartbeat of undermining the presidency of the United States in Executive Actions are back in Executive Treason with a new-and deadlier-plot to destabilize the U.S. government. It begins with the mugging and murder of a female White House staffer. Secret Service Agent Scott Roarke discovers the larger truth: the murder was committed by his secret nemesis, the mysterious assassin who had stayed one step ahead of him during the presidential campaign. This time, Roarke has found clues about the assassin's past that give him the tools he needs to hunt the hunter and also silence a popular hate talk radio host dividing the country. But the clues can only go so far. Roarke needs all his skill and a huge amount of luck if he's going to catch his quarry.

"More chilling than science fiction. Gary Grossman shows how the media itself can become a weapon of mass destruction. You'll never listen to talk radio again without a shiver going down your spine."-GARRY GOLDMAN, executive producer of Minority Report and screenwriter for Navy SEALs and Total Recall
Praise for Executive Treason

"As topical as tomorrow's Internet blog ... fast-paced, with vivid characters and a plot right off the front pages. Surprises you on every page. A winner." -Larry Bond, New York Times bestselling author of Dangerous Ground

"Executive Actions is the best political thriller I have read in a long, long time-right up there with the very best of David Baldacci. Gary Grossman has written a masterpiece of suspense, powerfully written and filled with wildly imaginative twists. Get ready to lose yourself in a hell of a story." -Michael Palmer, New York Times bestselling author of Oath of Office

"Grossman has done lots of research on everything from political infighting to clandestine military operations. . . . [H]olds reader interest right up to the inevitable conclusion." -Publishers Weekly

"More chilling than science fiction. Gary Grossman shows how the media itself can become a weapon of mass destruction. You'll never listen to talk radio again without a shiver going down your spine." -Gary Goldman, Executive Producer of Minority Report and Screenwriter for Navy SEALs and Total Recall

"Moving at break-neck speed, Executive Command is nothing short of sensational. Grossman is a master storyteller who sets you up and delivers. Expertly woven and highly researched. Executive Command is not just a great book, it's a riveting experience. So well written, I found myself re-reading sentences seeking a double dose of the fine craft." -W.G. Griffiths, award-winning and bestselling author of Methuselah's Pillar, Malchus, Driven, Takedown, and Talons
Gary Grossman's first novel, Executive Actions, propelled him into the world of political thrillers. Executive Treason, the sequel, further tapped Grossman's experience as a journalist, newspaper columnist, documentary television producer, reporter and playwright. The third book in the series, Executive Command, nearly brought his trilogy to a conclusion. But there was more-and Executive Force covers dangerous new ground. Grossman has written for the New York Times, Boston Globe, and Boston Herald American. He covered presidential campaigns for WBZ-TV in Boston, and has produced television series for NBC News, CNN, NBC, ABC, CBS, FOX and 40 cable networks. He is a multiple Emmy Award winning producer, served as chair of the Government Affairs Committee for the Caucus for Television, Producers, Writers and Directors, and is a member of the International Thriller Writers Association. Grossman has taught at Emerson College (where he is a member of the Board of Trustees), Boston University, USC, and Loyola Marymount University, and is a contributing editor to Media Ethics Magazine.
NGR9781635764697
Executive Treason by Gary Grossman
Gary Grossman
The Executive Series
New
Paperback
EverAfter Romance
2018-07-26
560
1635764696
9781635764697
N/A
Book picture is for illustrative purposes only, actual binding, cover or edition may vary.
This is a new book - be the first to read this copy. With untouched pages and a perfect binding, your brand new copy is ready to be opened for the first time
Trustpilot