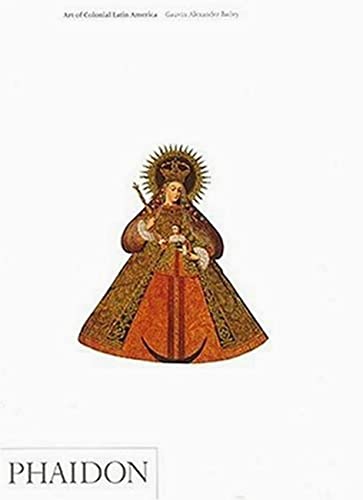 A lively account of the interaction between European and indigenous artists that took place during more than 300 years of Spanish and Portuguese colonial influence in Latin America (c.1492-1820). The book offers a fascinating insight into viceregal, missionary and civic architecture, as well as painting, sculpture and such 'minor arts' as furniture, textiles and ceramics. This is a long-awaited book on an increasingly popular subject and includes many previously unillustrated works

"The bargain of the year, crammed with original research, but priced as a general interest book... A lucid, fascinating and beautifully illustrated account of the spectacular results of creative fusion between the vibrant visual cultures of South America and European baroque art. A book which opens up a little-known world."-Jane Stevenson, novelist, The Observer

"Seldom can so much original research, fresh information and illustrations of so many unfamiliar works of art have appeared in a reasonably priced, mass-market paperback... It is a considerable achievement to have surveyed such a vast range of material from such a rich and various region in a single volume... This book, at a popular price, represents a remarkable bargain. Buy it and discover a new world hitherto all but closed to the Anglophone reader."-The Tablet

"Warmly recommended to all teachers and students of the history of early modern art and architecture... The accessible text and generous number of well-presented illustrations also reveal the 'staggering variety of media' practised in Latin America... Contributes to a rapidly growing consensus that the arts of Latin America, and the world, existed in the early modern period as they do now, not just in a dualistic diaologue between 'us and them', but in a complex interconnectedness."-Rodney Palmer, University of East Anglia, The Art Book

On the Art & Ideas series

"Art & Ideas has broken new ground in making accessible authoritative views on periods, movements and concepts in art. As a series it represents a real advance in publishing."-Sir Nicholas Serota, Director, Tate London

"The format is wonderful and offers what had long been missing in academic studies: usable manuals for specific themes or periods... I am definitely not alone in welcoming Art & Ideas as a precious set of teaching tools."-Joachim Pissarro, Yale University

"Phaidon's series may prove to be the pick of the crop. It boasts expert but undogmatic texts and a wealth of illustrations."-The Sunday Telegraph

Gauvin Alexander Bailey is Associate Professor of Art History at Clark University, Massachusetts. His previous publications include Between Renaissance and Baroque: Jesuit Art in Rome, 1565-1610, and Art on the Jesuit Missions in Asia and Latin America, 1542-1773.

Introduction; 1. First Encounters: The Pre-Hispanic World and the Colonial Scene; 2. Eyeing the Other: The Indigenous Response 3. The image of empire: The arts of the viceroys; 4. Making Art: Guilds and Academies; 5. Idols and Altars: The Arts of the Missions and Country Churches; 6. A Divine Splendour: The Arts of the Metropolitan Churches; 7. Town and Country: The Arts of the Colonial Aristocracy; 8. The Renaissance Abroad: The Iberian Empires in Asia and Africa; Epilogue; Glossary; Brief Biographies; Key Dates; Map; Further Reading; Index; Acknowledgements

GOR004778782
Art of Colonial Latin America by Gauvin Alexander Bailey
Gauvin Alexander Bailey
Art & Ideas
Used - Very Good
Paperback
Phaidon Press Ltd
2005-01-19
448
0714841579
9780714841571
N/A
Book picture is for illustrative purposes only, actual binding, cover or edition may vary.
This is a used book - there is no escaping the fact it has been read by someone else and it will show signs of wear and previous use. Overall we expect it to be in very good condition, but if you are not entirely satisfied please get in touch with us.