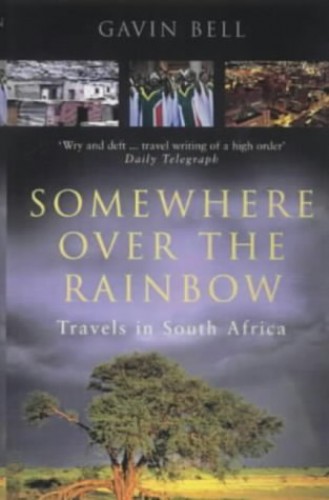 Somewhere Over The Rainbow
by Gavin Bell

Somewhere Over The Rainbow Summary

Somewhere Over The Rainbow: Travels in South Africa by Gavin Bell

Near the southern tip of Africa, there is a mountain that does a conjuring trick with the biggest tablecloth on earth. In a sacred forest near the Limpopo river, there is a bird that flies on wings of thunder, flashing lightning from its eyes and bearing rain in its beak. In between, there is a hauntingly beautiful land and millions of confused people. When Archbishop Desmond Tutu dubbed his native South Africa the 'Rainbow Nation', he conjured a vision of ethnic diversity and harmony in a country with eleven official languages, two national anthems, and a parliament that shuttled between two cities. As a foreign correspondent reporting on the last days of apartheid, Gavin Bell thought it was a brave image and wondered how long it would endure. A few years later, he returned to find out what had happened to Tutu's rainbow. In his travels he found a country at odds with itself, swinging between hope and despair, buoyed by a sense of freedom and haunted by a fear of violent crime. SOMEWHERE OVER THE RAINBOW is not only a fine travel book by an award-winning writer, it is a compelling portrait of a country in search of an identity. The leopard stories are good too.

Somewhere Over The Rainbow Reviews

Wry and deft ... travel writing of a high order, given steel by [Bell's] keen understanding of the country's contradictions * DAILY TELEGRAPH *
A fine, gentle and loving travel book about South Africa which captures the magic of the land and the warmth of its peoples * SCOTSMAN *
Wherever Bell goes, he brings a gimlet eye to the human and unusual * YORKSHIRE POST *
One of life's great wanderers, at home when he is away ... a lucid, deeply informative and highly entertaining piece of travel prose * GLASGOW HERALD *
A warm, sane and illuminating book * Ned Sherrin *

After working in a number of countries for Reuters and THE TIMES, Gavin Bell won the 1995 Thomas Cook Travel Award for IN SEARCH OF TUSITALA. He lives in his native Scotland and works as a journalist.

GOR000803298
Somewhere Over The Rainbow: Travels in South Africa by Gavin Bell
Gavin Bell
Used - Very Good
Paperback
Little, Brown Book Group
2001-02-01
320
0349112614
9780349112619
N/A
Book picture is for illustrative purposes only, actual binding, cover or edition may vary.
This is a used book - there is no escaping the fact it has been read by someone else and it will show signs of wear and previous use. Overall we expect it to be in very good condition, but if you are not entirely satisfied please get in touch with us.