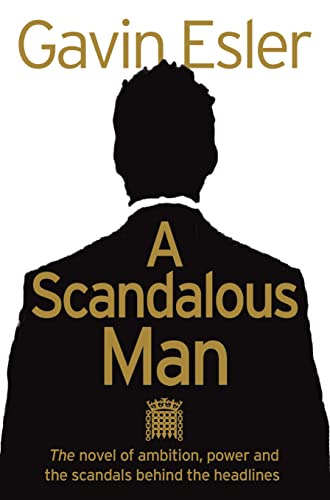 A Scandalous Man
by Gavin Esler

An absorbing novel of power, politics, terror and lies from the co-host of Newsnight

A Scandalous Man by Gavin Esler

An absorbing novel of power, politics, terror and lies from the co-host of Newsnight

Robin Burnett has spent years at the heart of power, pulling the strings. With friends in Downing Street, the White House and the CIA he is known as the brightest politician of his generation, tipped to go all the way to the top. But when the media discover that Robin is at the heart of a shocking sex scandal, his glittering career comes to an abrupt end. Robin and those close to him will pay the price of corruption, lies and ruthless ambition, and learn that with a twenty-four hour hungry media, scandal can be hard to avoid.

Gavin Esler's novel gives a real sense of the adrenalin of power when you feel the top job is within your grasp. A Scandalous Man presents fascinating, wholly credible scenarios on relationships and secret arrangements with the United States and the Middle East.

"A Scandalous Man" is a compelling book, its political sophistication made luminous with wisdom, sympathy and brilliant story-telling'
Bernard Cornwell

`While Esler's story is sweeping in scope and complex both politically and emotional, it's always accessible and fast-paced'
Daily Mirror

`This is a cracking story, well told, with a conclusion that is as shocking as it is inevitable...Can't wait for the next one'
Daily Express

`...an acute and poignant account of the impact politics has on flesh and blood'
Arena

`Skillfully written...' News of the World

Gavin Esler was born in 1953 in Glasgow. He began his career in print journalism on the Belfast Telegraph. He then joined the BBC as their Northern Ireland correspondent. After a short stint on Newsnight he was made Washington correspondent in 1989 and North America correspondent a year later. In 1997 he became the anchor for BBC News 24 reporting from all over the world. He returned to Newsnight in 2003.

GOR000421501
A Scandalous Man by Gavin Esler
Gavin Esler
Used - Very Good
Paperback
HarperCollins Publishers
2008-11-03
416
0007280912
9780007280919
N/A
Book picture is for illustrative purposes only, actual binding, cover or edition may vary.
This is a used book - there is no escaping the fact it has been read by someone else and it will show signs of wear and previous use. Overall we expect it to be in very good condition, but if you are not entirely satisfied please get in touch with us.