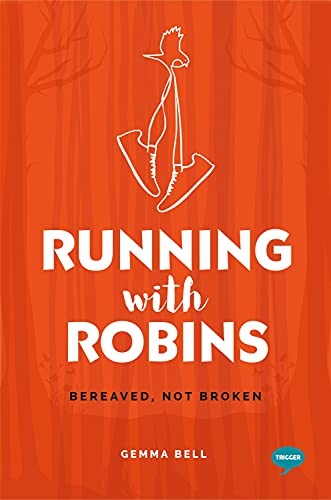 Running with Robins
by Gemma Bell

Used Price
$15.99
inc. GST
Free Shipping in Australia
Running helped Gemma feel closer to the father she lost to cancer at such a young age, but it was also the reason she collapsed in December 2015, and was hospitalised for nearly a month. Recovery wasn't easy, neither was losing her dad, but Running with Robins tells us how she survived and learnt to thrive.
Reviews:
Trustpilot
Very Good

Running with Robins: Bereaved, not Broken by Gemma Bell

Gemma Bell lived healthily and happily with her family until her life was thrown into turmoil. While she was still school-age, Gemma's dad died from cancer.
Losing her dad at such an early age had a profound effect on Gemma, and she became desperate to find a way of reconnecting with his memory. Inspired by her dad's love of running, Gemma started to follow in his footsteps. But it wasn't long until the running took over her life, she became obsessed with going further and faster. The more she ran, the closer she felt to him.
Then, in December 2015, Gemma collapsed after a run, and was hospitalised for nearly a month. After losing her dad, Gemma already knew just how fragile life was, but being forced to spend her Christmas and New Year in hospital was a lightbulb moment for her. She saw how close her addiction had come to robbing her of everything that was truly important. Recovery wasn't an easy road but now she's stronger than ever and living a much more fulfilling life. This is Gemma's story.

Gemma Bell still runs but now she runs to celebrate being alive. She recently ran a marathon in memory of her dad and raised over GBP2500 for Cancer Research charity. She is also keen to help others to recognise the wealth of physical and mental benefits of running, but also the dangers. Gemma now enjoys a wide range of activities as well as running, including horse riding, cooking and spending time with her family.

GOR009716522
Running with Robins: Bereaved, not Broken by Gemma Bell
Gemma Bell
Inspirational Series
Used - Very Good
Paperback
Trigger Publishing
2018-07-30
200
1911246895
9781911246893
N/A
Book picture is for illustrative purposes only, actual binding, cover or edition may vary.
This is a used book - there is no escaping the fact it has been read by someone else and it will show signs of wear and previous use. Overall we expect it to be in very good condition, but if you are not entirely satisfied please get in touch with us.