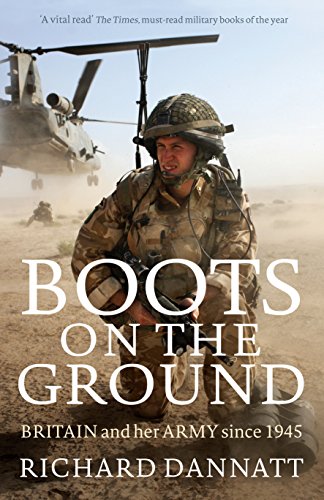 Boots on the Ground
by General Lord Richard Dannatt

Boots on the Ground Summary

Boots on the Ground: Britain and her Army since 1945 by General Lord Richard Dannatt

On Luneberg Heath in 1945, the German High Command surrendered to Field Marshall Montgomery; in 2015, seventy years after this historic triumph, the last units of the British Army finally left their garrisons next to Luneberg Heath. Boots on the Ground is the story of those years, following the British Army against the backdrop of Britain's shifting security and defence policies. From the decolonisation of India to the two invasions of Iraq, and, of course, Ireland, the book tracks the key historical conflicts, both big and small, of Britain's transformation from a leading nation with some 2 million troops in 1945, to a significantly reduced place on the world stage and fewer than 82,000 troops in 2015. Despite this apparent de-escalation, at no point since WWII has Britain not had 'boots on the ground' - and with the current tensions in the Middle East, and the rise of terrorism, this situation is unlikely to change. Sir Richard Dannatt brings forty years of military service, including as Chief of Staff, to tell the fascinating story of how the British Army has shaped, and been shaped by, world events from the Cold War to the Good Friday Agreement. Whether examining the fallout of empire in the insurgencies of Kenya and Indonesia, the politically fraught battle for the Falklands, the long-standing conflict in Ireland or Britain's relationship with NATO and experience of fighting with - or for - America, Dannatt examines the complexity of perhaps the greatest British institution.

Customer Reviews - Boots on the Ground

Boots on the Ground Reviews

A vital read for any politician taking decisions about military intervention. -- Nia Griffith * The Times, must-read military books of the year *
An intriguing book, fearlessly pulling no punches, and thought-provoking at every turn -- Robert Fox * Evening Standard *
Essential reading...a book for the shelves of everyone who cares about British history and our future in the world * Mature Times *
Ambitious...to date, the best account of the British soldier and the role he or she has played since 1945 * Prospect *
Boots on the Ground is a crisply written and fascinating account not just of where the British Army has fought or peace-kept in the years since 1945 but of its place in a changing society too. A book of high value and great relevance. -- Lord Peter Hennessy
Ably and interestingly carries forward to the present day the story of the army as a key player in British national life. -- Corelli Barnett, author of 'Britain and Her Army'

General the Lord Dannatt GCB CBE MC DL served in the army from 1971-2009, during which time he led troops in Ireland and Kosovo and held the positions of Commander-in-Chief, Land Command and Chief of the General Staff. He is now Constable of the Tower of London, where he lives. His autobiography is Leading from the Front (Corgi, 2010).

GOR008700819
Boots on the Ground: Britain and her Army since 1945 by General Lord Richard Dannatt
General Lord Richard Dannatt
Used - Very Good
Paperback
Profile Books Ltd
2017-05-25
432
1781253811
9781781253816
N/A
Book picture is for illustrative purposes only, actual binding, cover or edition may vary.
This is a used book - there is no escaping the fact it has been read by someone else and it will show signs of wear and previous use. Overall we expect it to be in very good condition, but if you are not entirely satisfied please get in touch with us.