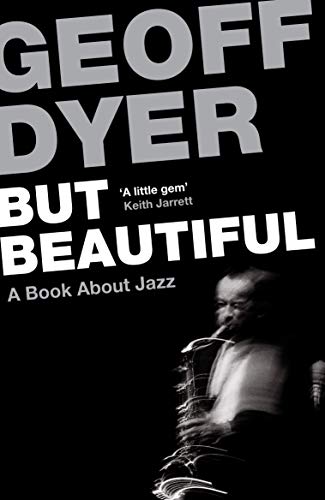 But Beautiful
by Geoff Dyer

But Beautiful: A Book About Jazz by Geoff Dyer

Lester Young fading away in a hotel room; Charles Mingus storming down the streets of New York on a too-small bicycle; Thelonius Monk creating his own private language on the piano... In eight poetically charged vignettes, Geoff Dyer skilfully evokes the embattled lives of the players who shaped modern jazz. He draws on photos and anecdotes, but music is the driving force of But Beautiful and Dyer brings it to life in luminescent and wildly metaphoric prose that mirrors the quirks, eccentricity, and brilliance of each musician's style.

Remarkable...there can be few books on jazz written with such tenderness and care. -- Adam Lively * * Times Literary Supplement * *
But Beautiful is just that. A moving and highly original tribute to Black American Music. -- Bryan Ferry
As intricate a mixture of biographical essay and make-believe as is likely to be written. * * New York Times * *
The only book about jazz that i have recommended to my friends. It is a little gem. -- Keith Jarrett

Geoff Dyer is the author of Jeff in Venice, Death in Varanasi and three previous novels, as well as several non-fiction books. Dyer has won the Somerset Maugham Prize, the Bollinger Everyman Wodehouse Prize for Comic Fiction, a Lannan Literary Award, the International Center of Photography's 2006 Infinity Award and the American Academy of Arts and Letters' E.M. Forster Award. In 2009 he was named GQ's Writer of the Year. He won a National Book Critics Circle Award in 2012. In 2015 he received a Windham Campbell Prize for non-fiction. He currently lives in Los Angeles.

GOR004770581
But Beautiful: A Book About Jazz by Geoff Dyer
Geoff Dyer
Used - Very Good
Paperback
Canongate Books Ltd
2012-05-01
240
0857864025
9780857864024
Winner of Somerset Maugham Award 1992 Short-listed for John Llewellyn Rhys Memorial Prize 1992
Book picture is for illustrative purposes only, actual binding, cover or edition may vary.
This is a used book - there is no escaping the fact it has been read by someone else and it will show signs of wear and previous use. Overall we expect it to be in very good condition, but if you are not entirely satisfied please get in touch with us.