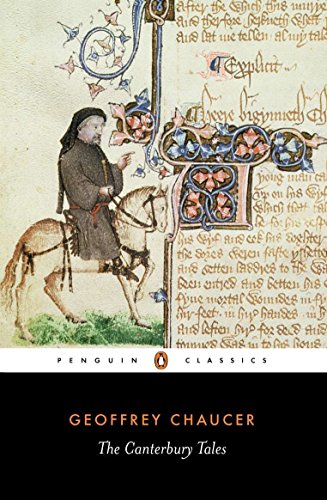 The Canterbury Tales
by Geoffrey Chaucer

In Stock
$34.99
inc. GST
The father of English literature shines in this authoritative selection from the greatest collection of narrative poems in the English language. Includes footnotes, normalized spelling, and a glossary of Middle English. Reissue.
Very Good Well Read
Only 1 left

The Canterbury Tales by Geoffrey Chaucer

At the Tabard Inn in Southwark, a jovial group of pilgrims assembles, including an unscrupulous Pardoner, a noble-minded Knight, a ribald Miller, the lusty Wife of Bath, and Chaucer himself. As they set out on their journey towards the shrine of Thomas a Becket in Canterbury, each character agrees to tell a tale. The twenty-four tales that follow are by turns learned, fantastic, pious, melancholy and lewd, and together offer an unrivalled glimpse into the mind and spirit of medieval England.

"Masterly . . . This new translation beckons us to make our own pilgrimage back to the very wellsprings of literature in our language." --Billy Collins

"The Canterbury Tales has remained popular for seven centuries. It is the most approachable masterpiece of the medieval world, and Mr. Raffel's translation makes the stories even more inviting."--Wall Street Journal

Born in London to a wine merchant, Geoffrey Chaucer (c1340-1400) became a royal servant and travelled as a diplomat to France, Spain and Italy. As well as being famed for his translations, his own work includes Troilus and Criseyde, The Book of the Duchess and The Legend of Good Women.
Jill Mann has been Professor Medieval & Renaissance English at Cambridge University, and most recently Notre Dame Professor of English. She is the author Feminizing Chaucer (2002), and co-editor (with Piero Boitani) of The Cambridge Companion to Chaucer (2nd edn. 2003).

Jill Mann has been Professor Medieval & Renaissance English at Cambridge University, and most recently she was Notre Dame Professor of English. She is the author Feminizing Chaucer (2002), and co-editor (with Piero Boitani) of The Cambridge Companion to Chaucer (2nd edn. 2003).

GOR002255557
The Canterbury Tales by Geoffrey Chaucer
Geoffrey Chaucer
Used - Very Good
Paperback
Penguin Books Ltd
2005-04-07
1328
014042234X
9780140422344
N/A
Book picture is for illustrative purposes only, actual binding, cover or edition may vary.
This is a used book - there is no escaping the fact it has been read by someone else and it will show signs of wear and previous use. Overall we expect it to be in very good condition, but if you are not entirely satisfied please get in touch with us.