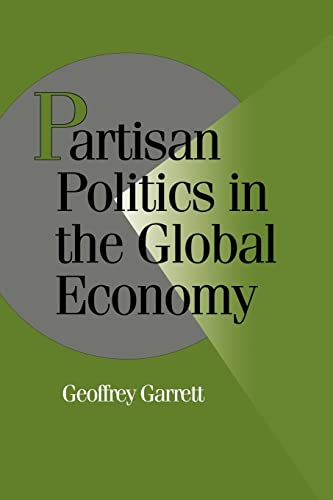 In Stock
$14.49
+10% GST
This book argues that national politics are not dominated by global markets. Citizens' demands for government protection from market forces (economic insecurity) are rising, while countries with strong trade union movements that can restrain the wage demands of workers (corporatism) are attractive to investors.
Good
Only 1 left

Geoffrey Garrett challenges the conventional wisdom about the domestic effects of the globalization of markets in the industrial democracies: the erosion of national autonomy and the demise of leftist alternatives to the free market. He demonstrates that globalization has strengthened the relationship between the political power of the left and organized labour and economic policies that reduce market-generated inequalities of risk and wealth. Moreover, macroeconomic outcomes in the era of global markets have been as good or better in strong left-labour regimes ('social democratic corporatism') as in other industrial countries. Pessimistic visions of the inexorable dominance of capital over labour or radical autarkic and nationalist backlashes against markets are significantly overstated. Electoral politics have not been dwarfed by market dynamics as social forces. Globalized markets have not rendered immutable the efficiency-equality trade-off.

'... an impassioned and crystal clear call to defend the possibility of politics. As such, it deserves to be widely read and welcomed.' Political Studies
"This bold and exciting book challenges conventional wisdom concerning the impact of globalization and argues that the prospects of social democracy are much better than most of us have supposed. Garrett's analysis bridges the analytical concerns of comparative and international political economy, and exemplifies state-of-the-art methodology in these academic fields. A tour de force on several counts, Partisan Politics in the Global Economy is a book that we will be talking about for many years to come." Jonas Pontusson, Cornell University
"Partisan Politics in the Global Economy brings theory and data to bear on the common assertion that today's levels of international economic integration have made national politics and policies irrelevant or impossible. In it, Geoffrey Garrett argues forcefully that domestic partisan politics, labor market institutions, and other forms of social organization continue to have an important impact on economic policy and performance in the advanced industrial countries. The book cogently addresses the crucial question of how the international economy affects domestic politics, and provides a powerful statement of a convincing perspective on this issue." Jeff Frieden, Harvard University
"In this richly empirical study, Geoffrey Garrett explodes popular shibboleths about the irrelevance of state policy in an era of globalization. Although Partisan Politics in the Global Economy contains as many questions as answers, it suggests that the death of European social democracy has been greatly exaggerated, and that at least through the 1980s democratic publics retained significant scope for macroeconomic choice. Any student of the world economy needs to come to terms with the arguments in this book." Robert O. Keohane, Duke University
"...the clarity of the book's organization and the breadth of its analysis are likely to make this volume a focal point for research in the politics of open economy macroeconomic policy for years to come." William Roberts Clark, Political Science Quarterly

GOR010090665
Partisan Politics in the Global Economy by Geoffrey Garrett (Yale University, Connecticut)
Geoffrey Garrett (Yale University, Connecticut)
Cambridge Studies in Comparative Politics
Used - Good
Paperback
Cambridge University Press
1998-03-13
204
0521446902
9780521446907
N/A
Book picture is for illustrative purposes only, actual binding, cover or edition may vary.
This is a used book - there is no escaping the fact it has been read by someone else and it will show signs of wear and previous use. Overall we expect it to be in very good condition, but if you are not entirely satisfied please get in touch with us.