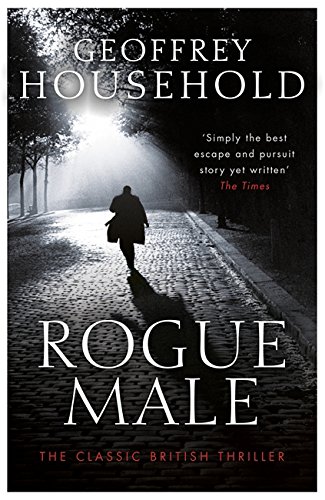 Used Price
$15.99
inc. GST
Free Shipping in Australia
THE the classic thriller of the 20th century - 'Simply the best escape and pursuit story yet written' [THE TIMES] - with an introduction by Robert Macfarlane
Reviews:
Trustpilot
Very Good

Rogue Male: Soon to be a major film by Geoffrey Household

An Englishman plans to assassinate the dictator of a European country. But he is foiled at the last moment and falls into the hands of ruthless and inventive torturers. They devise for him an ingenious and diplomatic death but, for once, they bungle the job and he escapes.

But England provides no safety from his pursuers - and the Rogue Male must strip away all the trappings of status and civilization as the hunter becomes a hunted animal.

Household's masterpiece: a bestseller that redefined its genre * GUARDIAN *
Nail-biting, boldly plotted... A mesmeric climax anticipates post-war existential fiction. By any standards: a masterpiece * INDEPENDENT *
The book... has lost none of its appeal as a tale of survival against the heaviest of odds * DAILY MAIL *
Rogue Male is probably the most famous chase thriller ever, influencing an entire generation from Frederick Forsyth to Lee Child * CATHOLIC HERALD *
Rogue Male is a classic thriller and a triumph of suspense * NEW YORK REVIEW OF BOOKS *
Rogue Male has achieved deservedly classic status. It's an exciting story, told in a crisp, no-nonsense style reminiscent of John Buchan * MAIL ON SUNDAY *
An overpowering tour de force ... spare, tense, desperately alive * NEW YORK TIMES *
Remains as exciting and probing as ever * THE TIMES *
We are in classic British adventure thriller territory - think Buchan - with an upper-class Englishman showing his stiff upper lip to best effect... A page-turner if ever there was one! * GOOD BOOK GUIDE *
This is a completely terrific read, a perfect example of its kind and one we'd recommend to lovers of classic thrillers * EASTERN DAILY PRESS *

Geoffrey Household (1900-1988)
Geoffrey Household was a prolific novelist of political thrillers and suspense stories, most notably the classic Rogue Male, which, The Times recently declared, 'remains as exciting and probing as ever'. He was as widely travelled as the settings of his books suggest: after graduating from Magdalen College, Oxford, with a first in English literature he worked abroad for 25 years, and served in British Intelligence during World War II in Greece and the Middle East. He married twice and eventually settled in the English countryside with his wife and three children.

GOR005868846
Rogue Male: Soon to be a major film by Geoffrey Household
Geoffrey Household
Used - Very Good
Paperback
Orion Publishing Co
2014-06-19
208
1409155838
9781409155836
N/A
Book picture is for illustrative purposes only, actual binding, cover or edition may vary.
This is a used book - there is no escaping the fact it has been read by someone else and it will show signs of wear and previous use. Overall we expect it to be in very good condition, but if you are not entirely satisfied please get in touch with us.