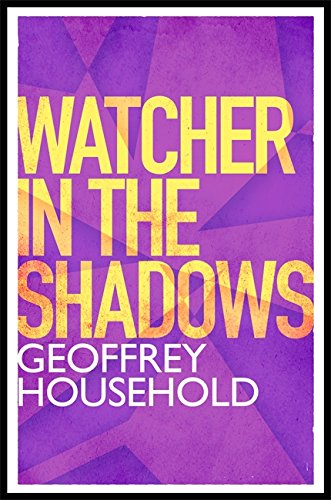 Watcher in the Shadows
by Geoffrey Household

In Stock
23,49 $
inc. GST
A deadly pursuit through the English countryside from the acclaimed author of ROGUE MALE.
Very Good Good
Only 3 left

Watcher in the Shadows Summary

Watcher in the Shadows by Geoffrey Household

A deadly pursuit through the English countryside from the acclaimed author of ROGUE MALE.

After working as a double agent for the British in Nazi Germany during the war, Charles Dennim is now living a quiet, unassuming life in England. Until the postman delivers a letter bomb to his front door.

Suddenly hunted by a killer with no name and no apparent motive, Dennim must use his wartime skills to stay alive, and the two master hunters embark on a deadly game of cat and mouse through the picturesque English countryside.

With brilliant descriptions of the Cotswolds and a high-stakes manhunt, this is a pursuit novel that stands with Household's best.

Watcher in the Shadows Reviews

The reissue of his backlist, of which Watcher in the Shadows is the latest to appear, is a welcome acknowledgement of Household as a master of his craft -- Barry Turner * DAILY MAIL *
Household...helped to develop the suspense story into an art form * NEW YORK TIMES *

Geoffrey Household (1900-1988)
Geoffrey Household was a prolific novelist of political thrillers and suspense stories, most notably the classic Rogue Male, which, The Times recently declared, 'remains as exciting and probing as ever'. He was as widely travelled as the settings of his books suggest: after graduating from Magdalen College, Oxford, with a first in English literature he worked abroad for 25 years, and served in British Intelligence during World War II in Greece and the Middle East. He married twice and eventually settled in the English countryside with his wife and three children.

GOR006332007
Watcher in the Shadows by Geoffrey Household
Geoffrey Household
Used - Very Good
Paperback
Orion Publishing Co
2014-11-20
256
1780224044
9781780224046
N/A
Book picture is for illustrative purposes only, actual binding, cover or edition may vary.
This is a used book - there is no escaping the fact it has been read by someone else and it will show signs of wear and previous use. Overall we expect it to be in very good condition, but if you are not entirely satisfied please get in touch with us.