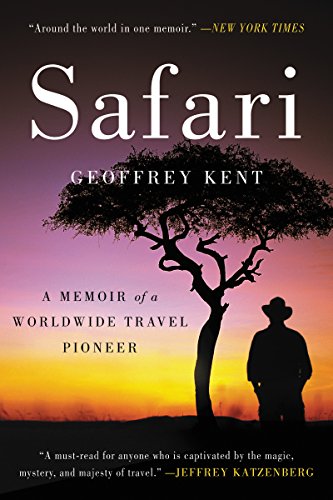 "Since the beginning, my philosophy has been `shoot with a camera not with a gun.'"

Geoffrey Kent had nothing but an East African shilling and an old Land Rover when he pioneered the luxury tent safari business in 1962 with his parents in Nairobi.

Safari: A Memoir of a Worldwide Travel Pioneer by Geoffrey Kent

"Since the beginning, my philosophy has been 'shoot with a camera not with a gun.'" Geoffrey Kent had nothing but an East African shilling and an old Land Rover when he pioneered the luxury tent safari business in 1962 with his parents in Nairobi. Today Kent takes thousands of adventurers, hungry for extraordinary and life-changing experiences, to the planet's wildest frontiers. In his gripping memoir, this "Indiana Jones-meets-James Bond" entrepreneur recounts his phenomenal journey. Kent's life reads like a work of fiction: growing up barefoot in the African bush, riding his motorcycle across the continent, and ultimately becoming the most sought-after travel professional in the world. Safari is a breathtaking and exhilarating trip to some of the most exotic and stunning locations on earth.

"[Mr. Kent] tells a good story, and this book is all about stories." -- -- Wall Street Journal "This is a must-read for anyone who is captivated by the magic, mystery, and majesty of travel." -- -- Jeffrey Katzenberg "As this book explains, there is a world of difference between the superficial experience of tourism and that of the traveller. Immersing oneself deeply in a culture different to one's own is closer to the ancient practice of pilgrimage-respectful, spiritually nourishing and life-changing." -- -- Sting & Trudie Styler "There are grand adventures reflected in these stories." -- -- Roma Downey & Mark Burnett "Kent's memoir transports you to another landscape as successfully as an Abercrombie & Kent expedition." -- -- Wilbur Smith "Travel, no matter the destination, really changes your perspective; it clears your head, opens your eyes and helps cultivate new ways of thinking and sometimes even the brightest ideas you've ever had." -- -- Ted Turner "From the opening safari with actor Richard Burton, to his travels with Prince Charles and Bill Gates, to his icy dip in the waters of the North Pole, Geoffrey shows how travel is the great adventure that will change your life and better the world." -- -- Jeffrey D. Sachs Economist and Director of the UN Sustainable Development Solutions Network --Jeffrey D. Sachs, Economist and Director of the UN Sustainable Development Solutions Network "Traveling is the most powerful self-development tool available to humanity. The more you travel the more you learn through the diversity of other places and people, the more you understand how the world and mankind are the most beautiful treasures available to all of us." -- -- Manfredi de Clunieres di Balsorano, Chairman of Silversea Cruises "Geoffrey Kent...recounts his riveting and far-flung adventures in his new memoir "Safari: A Memoir of a Worldwide Travel Pioneer"...The book is also a poignant love letter to Africa, where he was raised and led his inaugural safari (both in Kenya) in 1962." -- -- Forbes.com "A fantastic read and a tale worth telling." -- -- Tom Chamberlin, The Rake "This is a memoir for armchair travelers and thrill-seekers, one man's journey of wanderlust, challenges, exploration, trials and tribulations...'Safari' is a book that shares all with us so we can vicariously get some of the thrills Geoffrey Kent has so much enjoyed." -- -- El Paso Inc. "Kent's eye-opening...adventures are...an edge-of-your-seat reading experience, kept especially engaging by his warm personality, sense of humor, and keen behind-the-scenes-of-building-a-business stories." -- -- Parade

Geoffrey Kent has been inspiring travellers to discover the world in a uniquely stylish manner since founding Abercrombie & Kent in 1962 with his parents. Kent has served as president of the Prince of Wales Foundation in the United States and as chairman of the World Travel and Tourism Council. In April 2012, he was named to the British Travel and Hospitality Industry Hall of Fame for his outstanding contributions to the travel industry, and in December 2014, he received a Lifetime Achievement Award from Travel Weekly.

GOR008781063
Safari: A Memoir of a Worldwide Travel Pioneer by Geoffrey Kent
Geoffrey Kent
Used - Very Good
Paperback
HarperCollins Publishers Inc
2016-09-08
336
0062299212
9780062299215
N/A
Book picture is for illustrative purposes only, actual binding, cover or edition may vary.
This is a used book - there is no escaping the fact it has been read by someone else and it will show signs of wear and previous use. Overall we expect it to be in very good condition, but if you are not entirely satisfied please get in touch with us.