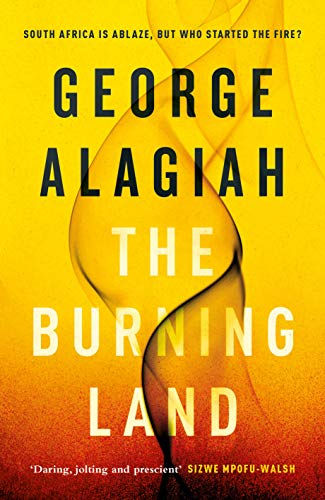 The Burning Land
by George Alagiah

The Burning Land by George Alagiah

'Gripping' Guardian
'Pacy and stylish . . . what a read' Jeremy Vine

'It was never meant to be like this. Sabotage, yes. Propaganda, yes. All of that and more - but not this. Not murder.'

South Africa has become a powder keg. Its precious land is being sold off to the highest bidders while the country's corrupt elite pocket the profits. As the dreams and hopes of its people are threatened, frustration turns to violence. With the shocking murder of one of the country's bright young hopes, the fuse is well and truly lit.

When conflict mediator Lindi returns home to the country of her birth she is reunited with her childhood friend Kagiso. Suddenly the professional becomes deeply personal and they find themselves at the heart of the chaos. They have just days to save themselves and the country they love, even as events are set in motion that no one, least of all they, can control.

A gripping tale of events spinning out of control in a country struggling to redefine itself * * Guardian * *
Daring, jolting, prescient -- SIZWE MPOFU-WALSH
George Alagiah manages to give us the best of both worlds: an absorbing, pacy thriller with great political depth -- TAHMIMA ANAM
A suspenseful and enlightening novel that portrays the extreme violence in the new South Africa with authority, precision of detail, and the kind of insight that makes the different factions and characters caught in the midst of the drama come vividly to life -- SHEILA KOHLER
Pacy and stylish; immensely gripping - what a read -- JEREMY VINE
Hugely topical, harrowing, humane and beautifully-written. Don't miss this -- AMANDA CRAIG
As an insight into the machinations of life in a contemporary South Africa . . . it is a real eye-opener * * Bookmunch * *
Praise for George Alagiah: Courageous, controversial, compassionate * * Daily Mail * *
The emphatic authority that George Alagiah has brought to his reports from Africa for BBC News is just as strong a component of his book * * The Times * *
An optimistic book suffused with Alagiah's outraged humanity * * Observer * *

George Alagiah is presenter of BBC News at Six, Britain's most watched news programme. That role followed ten years as a foreign correspondent, covering the 9/11 attacks on New York, the genocide in Rwanda, civil wars in Liberia, Afghanistan and Sierra Leone, and Nelson Mandela's presidency. He's won numerous awards, including The Royal Television Society and Amnesty International among others. Before the BBC he worked in print journalism. In 2008 he was awarded an OBE for services to journalism. The Burning Land was shortlisted for the Authors' Club Best First Novel Award and the Paul Torday Memorial Prize.

GOR010118988
The Burning Land by George Alagiah
George Alagiah
Used - Like New
Hardback
Canongate Books Ltd
2019-08-29
272
178689792X
9781786897923
Short-listed for Authors' Club Best First Novel Award 2020 (UK) Short-listed for Paul Torday Memorial Prize 2020 (UK)
Book picture is for illustrative purposes only, actual binding, cover or edition may vary.
The book has been read, but looks new. The book cover has no visible wear, and the dust jacket is included if applicable. No missing or damaged pages, no tears, possible very minimal creasing, no underlining or highlighting of text, and no writing in the margins.