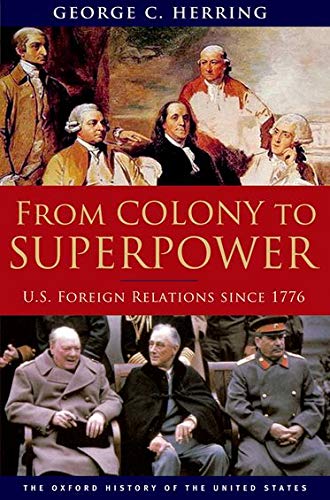 Used Price
$60.99
inc. GST
Free Shipping in Australia
In this installment of the multi-volume Oxford History of the United States, Herring delivers a sweeping account of the United States' foreign relations and diplomacy, which tells the dramatic story of America's emergence as superpower--its birth in revolution, its troubled present, and its uncertain future.
Reviews:
Trustpilot
Like New Very Good

From Colony to Superpower Summary

The Oxford History of the United States is the most respected multi-volume history of our nation in print. The series includes three Pulitzer Prize-winners, a New York Times bestseller, and winners of prestigious Bancroft and Parkman Prizes. From Colony to Superpower is the only thematic volume commissioned for the series. Here George C. Herring uses foreign relations as the lens through which to tell the story of America's dramatic rise from thirteen disparate colonies huddled along the Atlantic coast to the world's greatest superpower. A sweeping account of United States' foreign relations and diplomacy, this magisterial volume documents America's interaction with other peoples and nations of the world. Herring tells a story of stunning successes and sometimes tragic failures, captured in a fast-paced narrative that illuminates the central importance of foreign relations to the existence and survival of the nation, and highlights its ongoing impact on the lives of ordinary citizens. He shows how policymakers defined American interests broadly to include territorial expansion, access to growing markets, and the spread of an "American way" of life. And Herring does all this in a story rich in human drama and filled with epic events. Statesmen such as Benjamin Franklin and Woodrow Wilson and Harry Truman and Dean Acheson played key roles in America's rise to world power. But America's expansion as a nation also owes much to the adventurers and explorers, the sea captains, merchants and captains of industry, the missionaries and diplomats, who discovered or charted new lands, developed new avenues of commerce, and established and defended the nation's interests in foreign lands. From the American Revolution to the fifty-year struggle with communism and conflicts in Afghanistan and Iraq, From Colony to Superpower tells the dramatic story of America's emergence as superpower-its birth in revolution, its troubled present, and its uncertain future.

Customer Reviews - From Colony to Superpower

From Colony to Superpower Reviews

This is an ambitious work and a steal...Professionals and interested laymen will always want such a book. * Josef Joffe, International Herald Tribune *
We have long been waiting for a single-volume history like this one,...[it] deserves a place on the book shelf. * New York Times Book Review *
The strength of this book is the author's Herculean power of synthesis...Herring recaptures a quarter-millennium of American foreign policy with fluidity and felicity * New York Times Book Review *
A realistic and balanced account. * G.F.B, Contemporary Review. *

George C. Herring is Alumni Professor of History Emeritus at the University of Kentucky. A leading authority on U.S. foreign relations, he is the former editor of Diplomatic History and a past president of the Society for Historians of American Foreign Relations. He is the author of America's Longest War: The United States and Vietnam, 1950-1975, among other books.