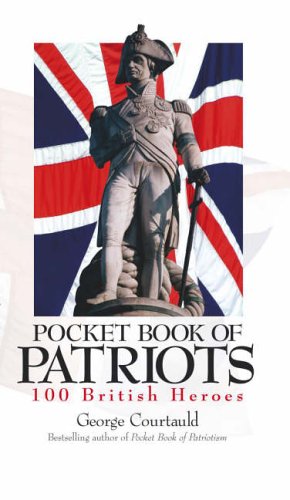 Out of Stock
$14.49
inc. GST
The Pocket Book of Patriotism proved that George Courtauld had a real gift for making history simple.
Very Good
Only 0 left

The Pocket Book of Patriotism proved that George Courtauld had a real gift for making history simple. The book became a word-of-mouth bestseller which dominated bookseller lists for many weeks. Now in this book he brings his talents to bear on great British figures. From King Arthur and The Venerable Bede, Isambard Kingdom Brunel and Oliver Cromwell, to St Patrick and William Wilberforce, here are 100 patriots of whom, in the author's view, we should be unashamedly proud. Presenting these beacon figures in the form of CVs, the author (himself a headhunter) casts their careers in a new light, highlighting key historical events, milestones in their careers, all reinforced by quotes from the figures themselves, capped by their personal hobbies and interests. Alongside the familiar names like William Caxton, Nelson and Elizabeth I, come those which are perhaps less familiar but no less important - Edward Longshanks, the Hammer of the Scots, and Warwick the Kingmaker; Pelagius and Dr Harvey. The result is a fascinating slice of history which brings key British figures to life in a simple and most accessible way. Anyone who enjoyed The Pocket Book of Patriotism will savour this book.

"Every home should have it" * Country Life *
"...fantastic" * The Field *
"'The patriotism that Courtauld's book embodies is distinctly low-key, unshowy, indeed quintessentially British'" -- Michael Gove * The Times *
"'As George Courtauld proves, it's never too late to learn a bit of history'" * The Daily Telegraph *

George Courtauld read Philosophy at Cambridge. The son of the Vice Lord Lieutenant of Essex, he has been a headhunter for 12 years. He lives in Pebmarsh, near Colchester, Essex, and is married with three boys. His first book was The Pocket Book of Patriotism.

GOR001705648
Pocket Book of Patriots: 100 British Heroes by George Courtauld
George Courtauld
Used - Very Good
Hardback
Ebury Publishing
2005-10-06
288
0091909015
9780091909017
N/A
Book picture is for illustrative purposes only, actual binding, cover or edition may vary.
This is a used book - there is no escaping the fact it has been read by someone else and it will show signs of wear and previous use. Overall we expect it to be in very good condition, but if you are not entirely satisfied please get in touch with us.